You are here: HomenextAreasnextBelford and Budle BaynextBelfordnextEventsnextThe Suffragists visit Belford

On 12 October 1912, Suffragist women began a march from Edinburgh to London to petition the Government on votes for women. The marchers, nicknamed The Brown Women  wore a uniform of tailored brown tweed suits, light green scarves, and hats decorated with a green cockade. They were expected to pay their own expenses, estimated at 35/- per week. A van carrying the marchers’ equipment was pulled by a horse named Butterfly, a mare belonging to Mrs Le Fonblanque, one of the organisers. A small group walked the whole way, and were joined for shorter stretches by supporters along the route. Among these was Isabel Cowe from St Abbs on her bicycle, which she used to make detours for scouting work up by-roads in order to get more signatures. Following the Great North Road, they passed through Berwick, Belford and Alnwick. 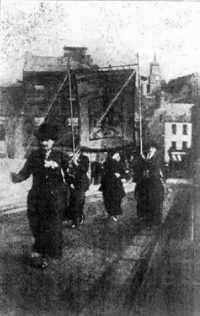 They arrived in Berwick on 16 October, after 13 hours walking through pouring rain. Despite this they held an evening meeting, although interrupted by rowdy youths. The next morning however they left for Belford in bright sunshine and encouraged by the number of people who had signed their petition.(pic) As they marched to Belford they sang ‘John Peel’, and local folk lined the road to greet them. At the Plough Inn at Beal (now the Lindisfarne Inn), they provoked heated debate amongst the diners, who, nevertheless, wished the women well on their journey:

Well, stick to it, dinna break down, women! Stick to it now, whatever you do!

At Belford on 17 October, local people turned out in numbers to see them as they arrived about 5pm. and at 8 o’clock a meeting in the Market Place was held, when short addresses were delivered on Women’s Suffrage. Several questions were asked at the close and answered with satisfaction. A large number of people signed their petition. The visit is recorded for posterity in a lantern slide taken outside the Blue Bell Hotel, probably the following morning.

Outside the Blue Bell Hotel, Belford

Staff of the hotel can be seen watching as seven women assemble for the next stage of their journey. Five hold their banner The Appeal of Womanhood, a smaller notice From Edinburgh to London for Women’s Suffrage, and a tray on which the petition can be signed. The sign on the van says:

The woman with the bicycle is probably Isabel Cowe. Butterfly the horse is clearly ready to set off on the journey.

The next stop was Alnwick where they were met some distance north of that town by a welcome party of Suffragists. A meeting was held in the town that night by the Market Cross, the women carrying collecting boxes and lanterns to help people see to sign the petition. The following morning they set off from the Tenantry Column for Morpeth.

A more detailed account of the women, their campaign and their march, can be found in Val Glass’s article.