You are here: HomenextAreasnextBelford and Budle BaynextBelfordnextPeoplenextBelford's Watch and Clockmakers 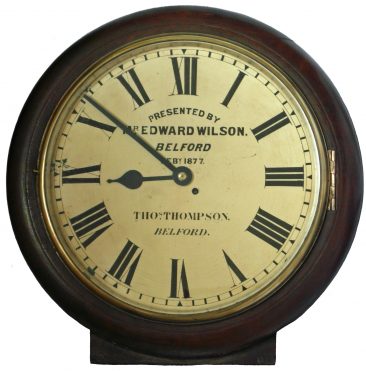 Although hard to believe today, Belford was once a centre of North Northumberland clock making. Thirteen different Watch and Clockmakers have been identified who worked in Belford between the late 18th and early 20th centuries.

Examples of the work of four of these men still survive, three of them within the village.

he Museum is fortunate to have on long term loan, a long case clock by the earliest of these makers – William Clark. This must date from between 1770 and 1774, as after that date he lived and worked in Morpeth. The clock case, tall, slim and with neat swan shaped pediments, is a shape local to the Alnwick, Wooler, Belford and Berwick area. The engraved face is unusual as the decoration features both an owl and a pair of snakes, images not usually found on clock faces, suggesting that this may have been a specially commissioned piece. 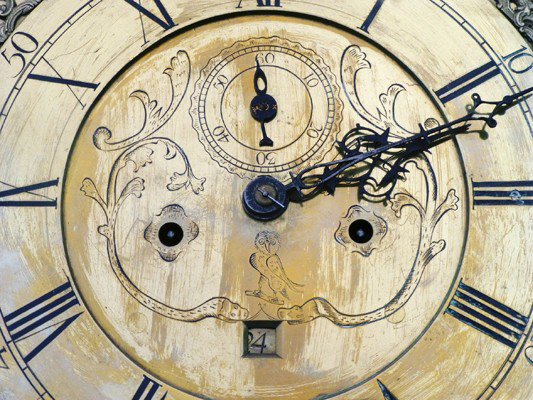 There was already a Christopher Thompson living in Belford in 1780, when his son Christopher was christened here. One or other Christopher is recorded as a Belford Clock and Watchmaker in Pigot’s 1822 Directory. The Thompson family tradition has it that a Christopher Thompson moved to Belford from Wooler in  1834, living in West Street until his death in 1866. Certainly Christopher did work for a period in Wooler, and it is possible that he served an apprenticeship there before returning to his father’s business in Belford. 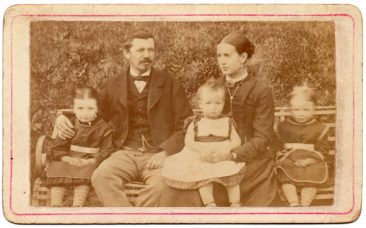 His son Thomas took over the business and moved it to the High Street by 1871. As well as making and selling clocks, the Thompsons contributed to the life of the village – they were strong Presbyterians, and gave support to the Presbyterian School.  Thomas became one of the founder members of the Belford Bowling Club. In about 1890, the family moved to Gateshead where Thomas felt there would be more employment opportunities for his family. The Museum has both a clock and a watch made by Thomas Thompson, and some interesting ephemera relating to his father Christopher. We also have photos of a long case clock made by Thomas.

Thomas Tait came to the village from Edinburgh, probably about 1802, and worked in Belford for 17 years, before moving to Alnwick. The last record of him in Alnwick seems to be in Pigot’s 1828/9 Directory.  One of his clocks remains in the village – a balcony clock made for the then Presbyterian Church in Nursery Lane. On the closure of the Church at the end of 2018, the clock was donated to Belford Museum. Two long case clocks made by him are also known. 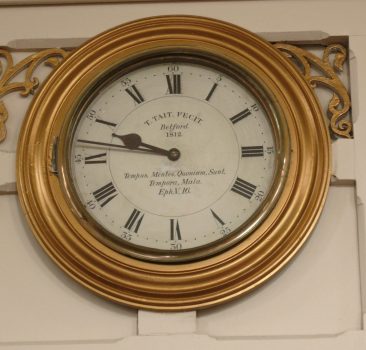 David Cairns was the son of a Berwick Carpenter. By 1823 he had moved to Belford, where he married Elspeth Elliott that year. The first reference to his working as a Clock and Watchmaker in Belford is in 1825. By 1831 the family had moved to Morpeth, and they were later to move on to Bishopwearmouth, Sunderland, where it seems likely it is his death which is recorded in 1864. A painted face long case clock made by David Cairns in Belford is known.

We have no examples of the work of the other known clockmakers which follow. If anyone reading this can provide the museum with photographs of their work, we should be most grateful

Other recorded Belford Clock and Watchmakers

Thomas Weatherley, a native of Berwick upon Tweed is listed as a Watchmaker  in Belford in 1801 and 1803 in the records of his children’s births.

Matthew Robson (b.1816 – d.1874) was born in Wooler in 1816, the son of a plasterer. He had married and was living and working in Belford by the early 1840s, and thereafter is listed as a Belford Watch and Clockmaker up to his death in 1874. There is a record of one of his long case clocks, although we have seen none. 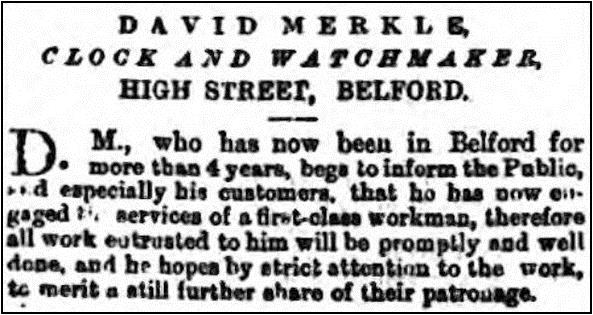 He continued as a Watch and Clockmaker in Belford until about 1882, and in 1881 was employing a William Young as a further Watchmaker. Merkel had moved to South Shields by 1883.

Duncan McGregor, Clock and Watch Maker is recorded as a lodger on North Bank in 1861.

Richard Bolton (b. c.1848) was born in Chatton c.1848, and is first recorded as a Belford Watchmaker/ Shopkeeper in the High Street in 1901, when he was assisted by his son William. By 1911, Richard’s occupation is now listed as a ‘watch jobber and fruiterer’.

Joseph Ross (b. c.1872 – 1932) came from the  Clock and Watchmaking firm of Ross and Ross, originally established by a Richard Nicholson in Bridge Street, Berwick in 1796. Joseph Ross, who had served his apprenticeship with the Nicholsons, took over the firm in c.1880, on the death of William Nicholson, son of the founder. The Belford Joseph Ross moved to Belford c.1910 to set up his own watch making business in the High Street. Although over age, Joseph enlisted in the Tyneside Scottish Regiment shortly after the outbreak of the First World War, and served throughout the war, until he was seriously wounded in the Spring of 1918. He was killed in a motor cycle accident in 1932.