Eleanor Weatherly seems to have been born in Berwick upon Tweed in Spring 1784; certainly she was christened there on 14 May at Holy Trinity Church. Her parents were John Weatherly, a Berwick flour merchant and his wife Mary Whitehead. She had three siblings, James, Susan and Nicholas. Sadly Eleanor’s mother died in December 1786 just after Nicholas’ birth.  After his wife’s death, John gave up the flour business, leased Outchester Farm from the Greenwich Hospital Estate, and raised his children there. Eleanor grew up to become housekeeper for the family.  In January 1804, to improve her handwriting, she began a diary. The entries describe her life as a daughter of a gentleman farmer and provide interesting insights into social life in the Belford area.

Running the family house was a demanding task. She saw to the cleaning, washing and cooking with the aid of a servant.  On 11 June 1805 she recorded:

“Was up this morning between 5 & 6 o’clock to bake bread – baked as much bread as would last us ten days”.

A considerable amount of time was spent on spinning, and cutting out and hand sewing clothes. Her entry for Thursday, 3 May, 1804 reads:

“Was up this morning at six o’clock to spin – I spun until seven in the evening and had two slips (or hanks) of yarn”.

Eleanor records hemming neckcloths and making shirts for the men in the family, and cutting out and sewing chemises for her and her sister. On 5 June 1804 she wrote:

“I have been very busy today since eleven o’clock – flounced two petticoats, hemmed three yards of muslin, darned my sprig muslin gown, made tea and last of all mended James’s small clothes (underwear).”

Most clothes were made by hand in the house, although, exceptionally, on 2 January 1804 she writes about a seamstress and her apprentice at the house making muslin gowns for the Belford Ball. Outdoor wear, such as greatcoats, riding habits and pelisses, were obtained from tradesmen in Belford.

Eleanor also had responsibilities for aspects of the farm, dealing with Turkeys, pig merchants and wool buyers.

Life was not all work, however.  Walking was the normal way of getting about and it has been calculated that Eleanor regularly walked distances of up to five miles. Her diary records visits to neighbours, shopping trips in Belford and walks simply for the sheer enjoyment of them. Typically on 24 May 1805, she noted:

“Susan and I took a walk to Chester Hill to see Miss Watson after dinner – we called at Spindleston upon Mr. Walton and from there to Glororum to tea where we met Mrs. Cook and we had a long chat about the Bent Hall dance – after tea we went to Bambro’ Friars and likewise to the Castle to see Miss Maughan – then returned the way we came”.

In the summer, she often swam at Budle Bay. Sometimes an early morning swim was followed by breakfast with the Watson family at Waren House. In the autumn and winter, playing cards was a popular way of passing the time, made more interesting by betting on the results. Games of whist, commerce and loo are all mentioned.  A particularly good day was 20 February 1804 when she spent the afternoon with her friends the Dinnings at Newlands:

“We were there rather early – spent a very pleasant afternoon – had a game of Commerce and  I won the pool which was 13/6 – stayed to supper.” 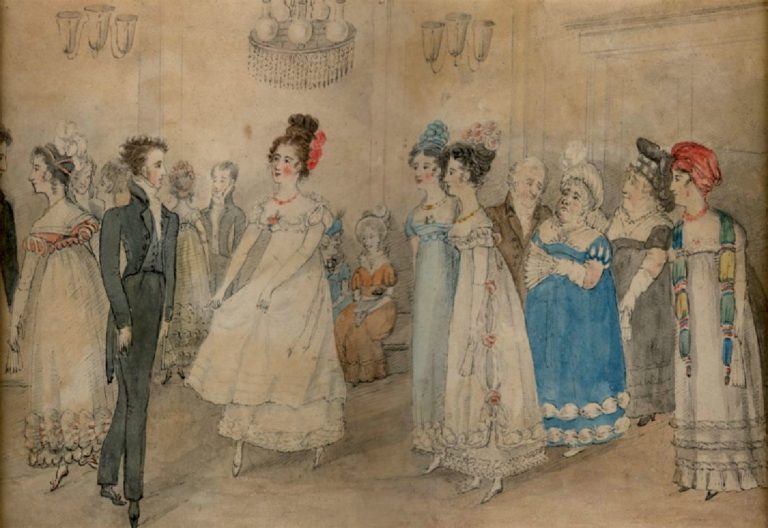 More organised entertainments took the form of dances, visits to the theatre and to the races. In the winter, a series of Subscription Balls at the Blue Bell in Belford were eagerly anticipated – the one on 17 April 1805 was attended by  19 ladies and 26 gentlemen, and the dancing continued until 5 in the morning!  A more splendid occasion was the Ball held at Chillingham Castle on 21 November 1804, when there were 200-300 people present and the dancing continued to 6.00am. It seems to have been the custom to link race meetings and theatre performances – and whether the meeting was at Belford or Lamberton, when the Weatherlys went to the races during the day, their evenings were often spent at the theatre, enjoying a performance by one of the touring companies, as was the occasion on 5 July 1804:

“Berwick – went to the races with Mr & Mrs Todd – dined with Mr. Todd and then dressed to go to the play with a large party – Mr Wilson treat me to the play which was ‘The Tragedy of Douglas’.”

The Weatherlys were a Presbyterian family, and generally Eleanor would attend the Sunday Meeting at Warenford, and it was there that she and Susan took their first communion on 7 October 1804. The family, however, were fairly flexible about where they attended worship – sometimes they walked to Belford to attend the Presbyterian service at the Erskine Church. Particularly at some of the festivals they attended St. Mary’s Parish Church – perhaps part of the attraction was who else might be seen there:

“This being Good Friday I went to Belford Church ……saw a great number of officers at Belford.”

Observing the Sabbath was important – when Eleanor could not attend church or chapel either through bad weather or ill health, time was set aside for religious contemplation, as on 15 January 1804, when suffering from a bad cold, she “learned a psalm and six verses of a chapter”.

In reading Eleanor’s diary, with its listing of domestic events and local gatherings, it is easy to forget that England was fighting France while she was writing. Nevertheless, the war is a thread which runs throughout the diary. At the beginning of February 1804, brother James was summoned to Alnwick when there was a false report of a French invasion. Numbers of officers were noted in Belford in March 1804, and March and July 1805. On 27 July and again on 5 November 1805, brother James had to spend a week on duty at Berwick Barracks. 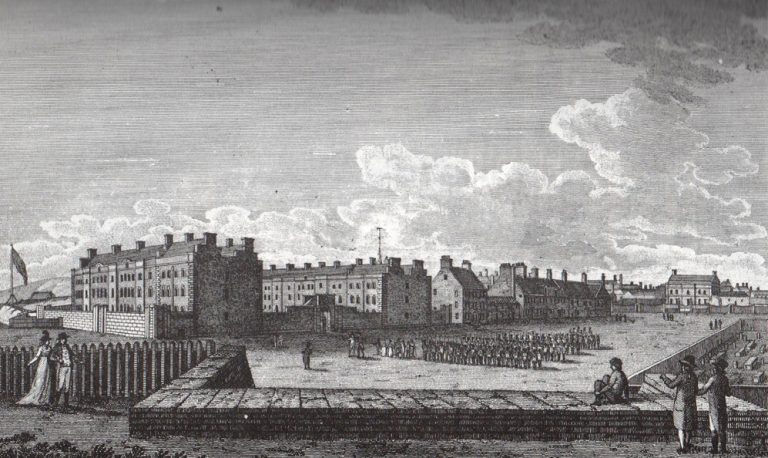 Berwick Barracks 1799 – From Fuller’s ‘History of Berwick upon Tweed’

Most memorably, on 8 November 1805, Eleanor was attending the theatre in Berwick when the news of Trafalgar reached the town:

“(The play) was just over when we heard a great noise in the street, and shortly after a flag of victory was brought into the theatre, with the joyful news that nineteen sail of the line were taken. But a damp was soon thrown over the general joy when it was learned that the brave Admiral Nelson had fallen in the action”. 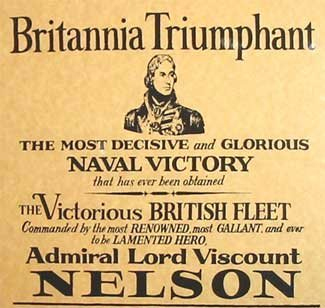 Eleanor stopped keeping her diary at the end of 1805, but her life continued though less fully recorded. On 21 March 1821, she married a Dunbar surgeon, Matthew Turnbull, and the couple set up home in Coldstream. A son, Matthew James, was born 5 years later.  Eleanor died in 1841, aged only 56, “esteemed, regretted and respected by a large circle of friends”.

Eleanor’s Diary which was transcribed by the late Joan Wright, has been published. Copies are available from Belford Museum (belfordmuseum@gmail.com) and from the Belford Newsagent, price £9.