You are here: HomenextAreasnextBelford and Budle BaynextBelfordnextPeoplenextIsabella Thomasin Ferguson and her Bequest

Isabella Thomasin Ferguson and her Bequest

“Perhaps the best friend the church ever had.” Isabella Thomasin Ferguson is remembered by the Hall named in her memory, adjacent to the Erskine Church. “She was identified with every department of Christian work undertaken in connection with the church. Her energy, quiet and unobtrusive, was pervasive, making for peaceful and harmonious work throughout.”

Isabella Thomasin Ferguson was born at Tynely near Ellingham, the only child of Thomas Ferguson and his wife Isabella, née Arthur, to survive infancy. She was baptised at Belford’s Erskine United Secession Presbyterian Church on 19 October 1829. Her father, Thomas, died, aged 40, on 4 August 1829, either before or very shortly after Isabella’s birth, and was buried at Belford Parish Church. Isabella and her mother lived for a short while at Lyham, but by 1841 were living in Belford, first at West Street, and then at Church Street. A sampler worked by Isabella in 1837 when she was 8 years old has recently come to light. Isabella continued to live in Church Street after her mother’s death in 1869. 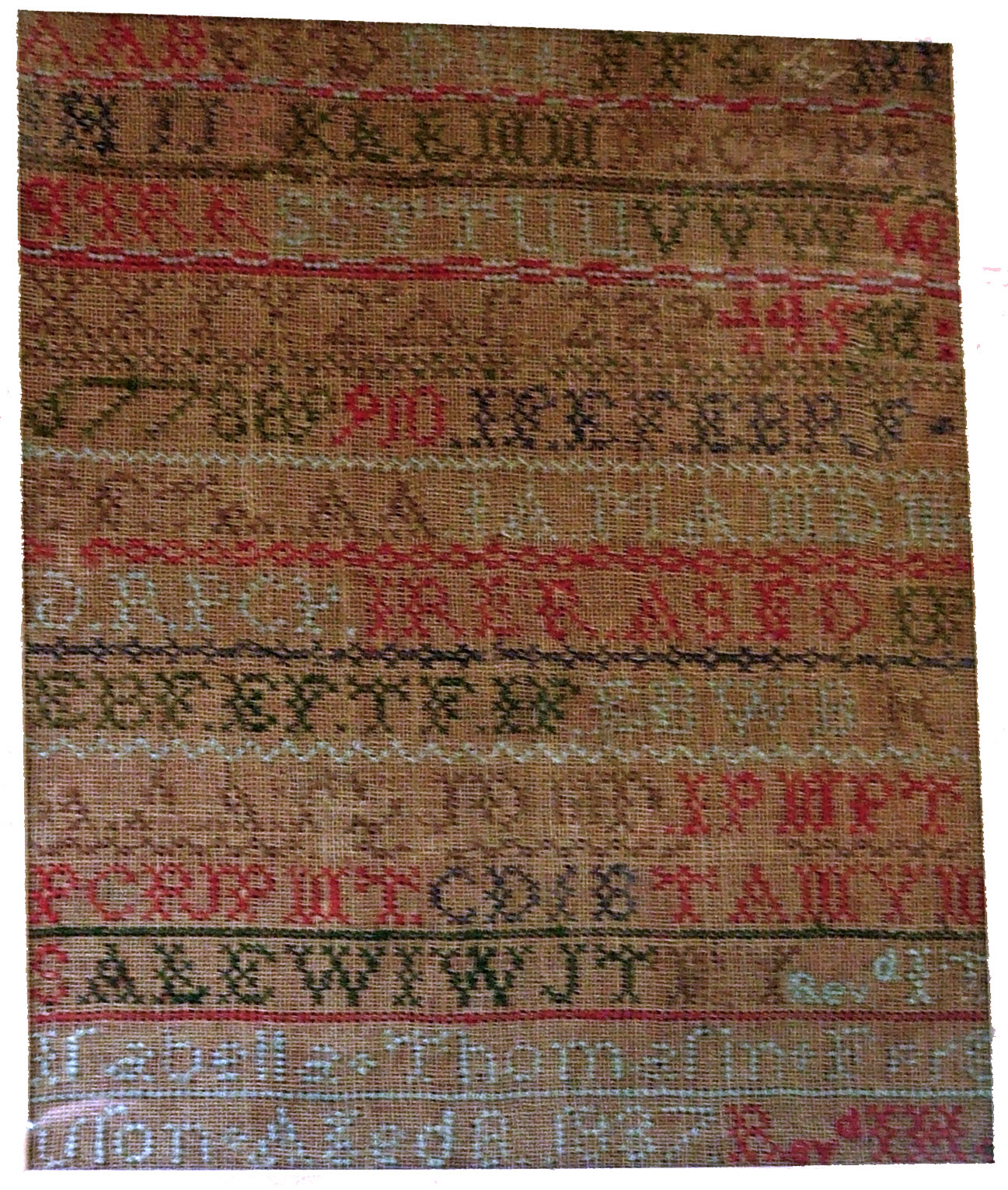 On the censuses, Isabella is consistently recorded as “annuitant” or “living on own means”. By the early 1860s, she was running a Seminary for Young Ladies with annual fees of £20. 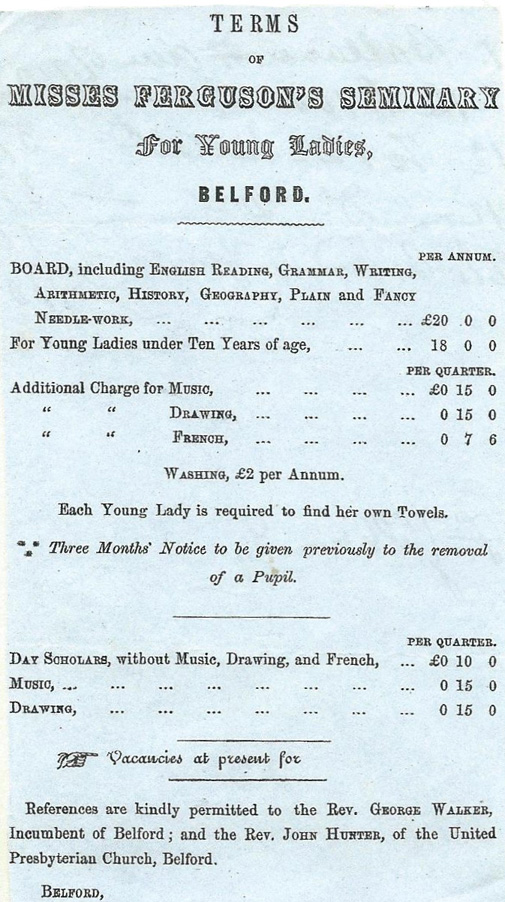 Involvement in the Church

As well as a religious commitment to the Erskine Church, Isabella had a strong family connection with the Church, as, through her mother, she was a cousin of Isabella Bromfield Ferguson who, in 1856, married the minister of the Erskine Church, the Reverend John Hunter. Isabella was involved in countless aspects of the work of the Church. As well as becoming Secretary and Treasurer of the local Colportage Committee, (Colportage: the distribution of publications, books, religious tracts by carriers called “colporteurs”.) she provided support to the colporteurs themselves. The sick and needy in the village received her kindness and attention, whether members of the church or not. Fundraising for the church was a constant preoccupation and her name is included regularly in newspaper reports of Bazaars and Soirees. Of particular concern to her was the welfare of the young folk of the district and she made it known that she intended to leave a bequest to the church which she hoped would be used to provide a new building for a Sunday School and other groups. 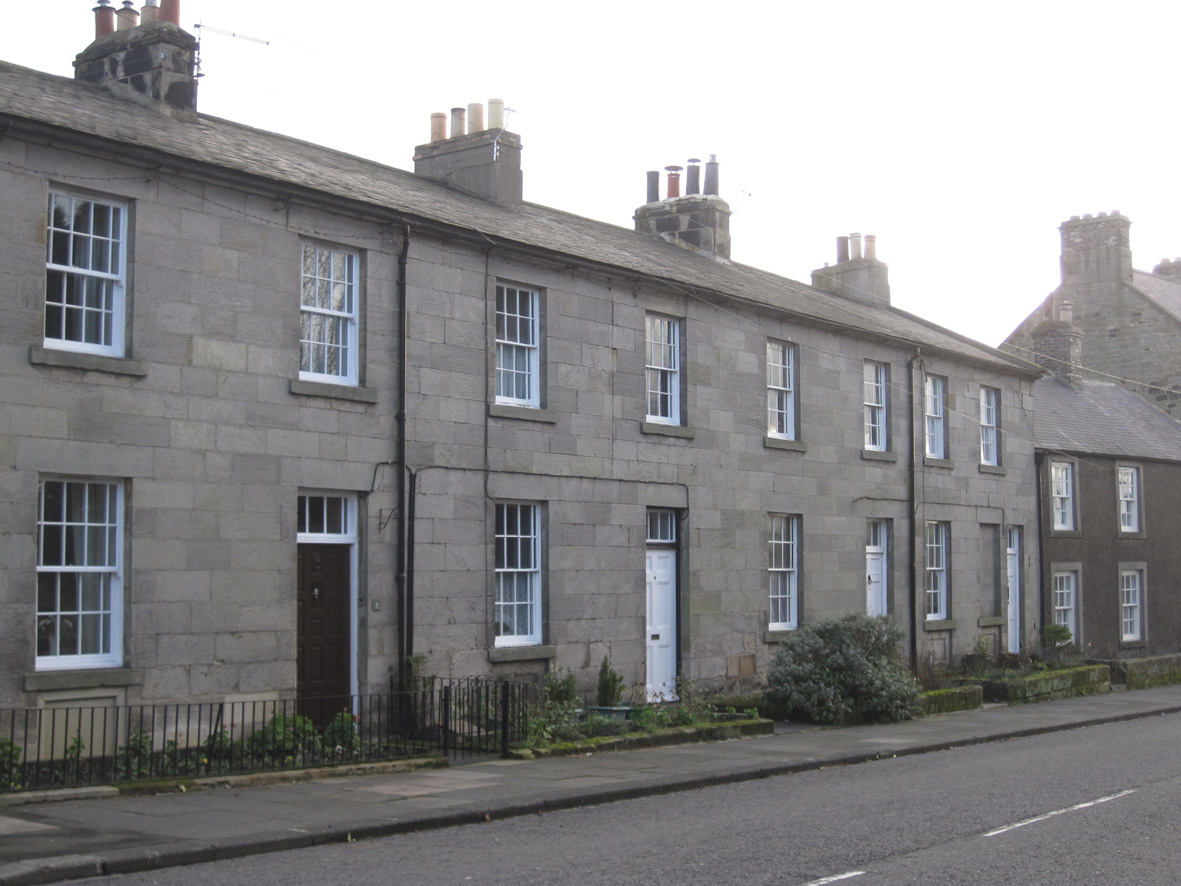 Isabella died suddenly of heart failure on 16 September 1903, and like her parents, was buried in the Parish Church graveyard, within view of her house on Church Street. In her will she left £100 towards a new building for a Sunday School. Many others also contributed and are listed in the Church’s Treasurer’s Book Treasurer’s Accounts extract

A description of the planned Sunday School building survives in an unidentified newspaper cutting of the period.

The hall will be in the Norman style, the front being executed in coursed work.   There will be a good entrance lobby at the front of the main hall, to which there are to be two entrances. This lobby will give access to two cloakrooms, from one of which admittance is gained to the church itself. The hall will be lighted from front, back and also from the sides, and will be a spacious room, with a screen to enable it to be divided into two class rooms, and with open principal roof, also lined up the sides of the walls to the sills of the windows. The internal woodwork will be of pitch pine. The hall is to be heated by radiators. A kitchen with conveniences adjoins the hall. 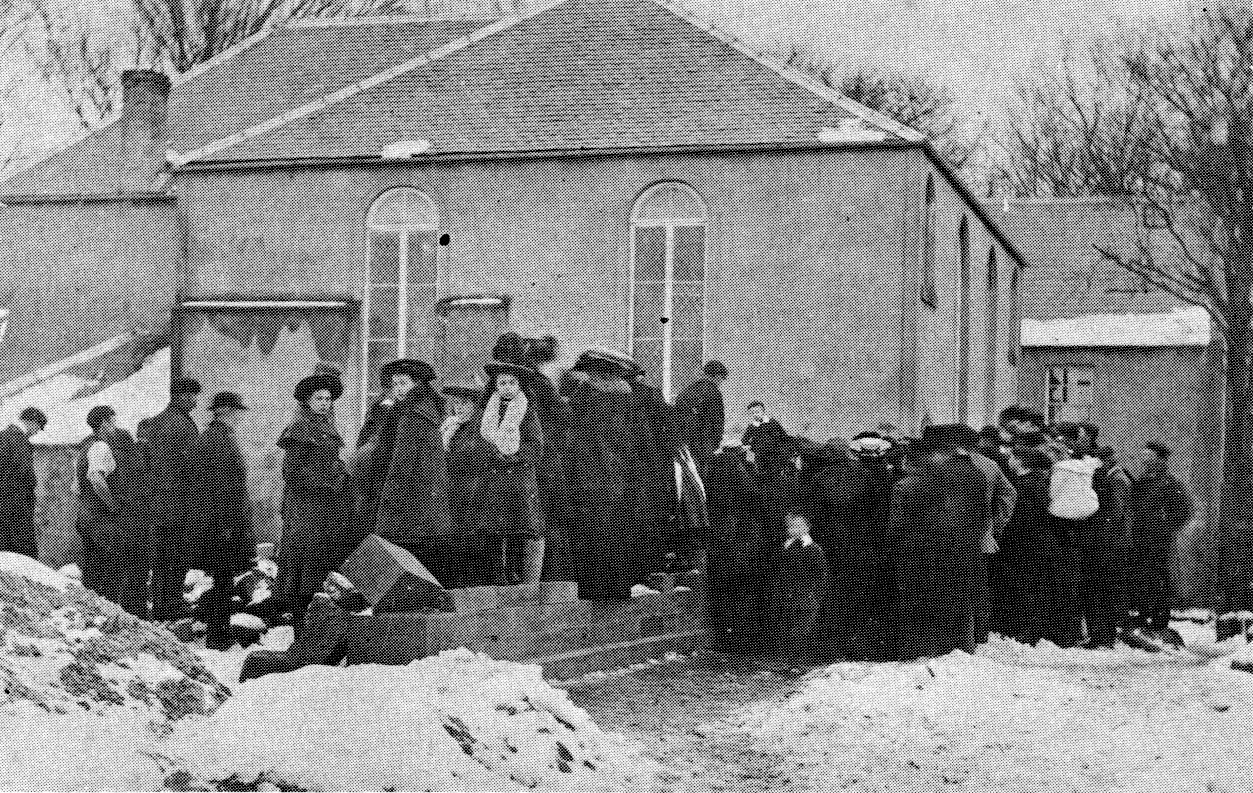 The foundation stones of Ferguson Hall were laid on 23 November 1904 by her cousin, Thomas Ferguson of Middleton, the Church Treasurer, William Millican of Hetton Hall,  and the retired Relieving Officer, Robert Guthrie, who were all presented with silver trowels, two of which have remained with the church. It was opened on 15 June 1905. It was initially known as the Ferguson Memorial Hall but “Memorial” seems to have been dropped some time ago.