Belford in 1909 and a visit to Lindisfarne 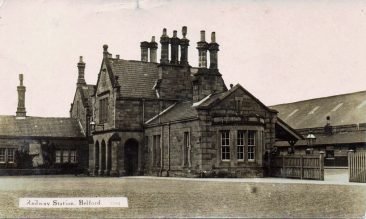 Returning to the railway line at Christon Bank, Belford station was reached in the early evening of Wednesday. A mile and a quarter’s walk along a rising high road brought us to the small unattractive, market-town of that name, with nothing to commend itself to the modern pilgrim save its convenient situation and the good accommodation of the old-fashioned 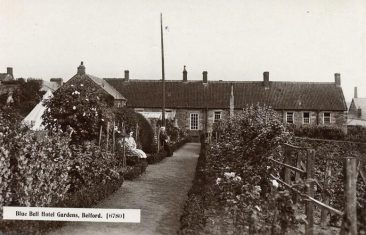 Blue Bell Hotel, with its beautiful and extensive flower and vegetable garden at the back.The Church of Belford, chiefly rebuilt in 1827, is of almost repellent ugliness in its exterior, but contains within a Norman chancel arch.

Owing to some confusion in arrangements,, we found ourselves unexpected at the “Blue Bell” till the morrow. By the aid of the telegraph wire, it was discovered that our visit to Holy Isle, could be anticipated, and at eight o’clock in the evening, Belford was left for a long five mile drive in a two wheeled trap, to gain the sacred spot by a most unusual route. 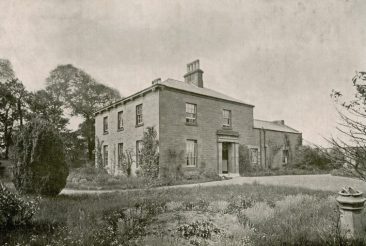 Following roads for some distance due north, the trap turned aside at Elwick Farm at a sharp right angle, through a gate, and across several grass fields, where there was no manner of a track, until at last the edge of the bay opposite Lindisfarne was reached as the dusk began to settle down. Here our youthful but expert driver pointed out to us, in what seemed the remote dim distance, the Beacons, which are two great, lofty obelisks of brick, so arranged by the edge of the waters as to guide shipping into the shallow sand-girt harbour of Holy Island. Certain parts of the mingled mud and sand, pretty close at hand, were also pointed out to us, where the ground was so treacherous that horse and trap with its contents would be speedily sucked in. From this point a considerable arc of a wide circle was described to reach the Beacons, where there was not a single post or stake to guide us. It was somewhat weird and uncanny being thus driven in the dim light, with no sound in the mysterious silence but the occasional plash of the wheels as they dipped into a pool of tide-left water, or the musical tooting note of a disturbed sandpiper. But the wits of our driver and the steadiness of the strong horse, as we sometimes hugged the shore with many a jolt, and then (for apparently no reason) dashed out some distance on to the dripping yet firm sand, prevailed, and at last a boat was descried not far from the water’s edge, lying off the nearest of the gigantic and unsightly Beacons.

Ere we had time to wonder how the boat could be gained on this flat sandy shore without not a little undressing, horse, trap, and all went calmly into the water, and out of the conveyance we stepped directly into the small boat manned by two bare-legged fishermen. The row across the mile of gently rippling intervening water was delightful, and by about half past nine we were stumbling over the rocky causeway that led us to the few lighted houses of the village of St. Mary’s.

The visit to Holy Island is described at http://www.islandshirearchives.org.uk/content/areas/holy-island/a-peripatic-pars…t-to-lindisfarne ‎