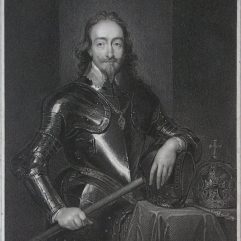 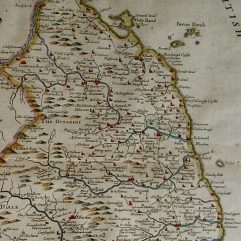 In 1639, in the period immediately before the outbreak of the English Civil War, King Charles I was engaged in a campaign against the Scots who objected to his attempt to introduce bishops to the Scottish Kirk. Edward Norgate, noted for the fine quality of his illuminations, was appointed Clerk of the Signet to Charles in 1638. In this capacity he travelled to Northumberland to join the King and act as his secretary, writing the King’s letters. In May 1639, he arrived at Belford and, in a letter written on 29 May, described what he found there.

Barwick, 29th May, 1639.
The King made a halt at Alnwick, upon some alarm that was in the camp, whereof he received information from my Lord General, so that persons of quality lay in their coaches, carts from the town being little and company great. So at Morpeth I staid, but the next day went on to Alnwick, whence the King was gone that morning to the army at Gaswick five miles short of Barwick, for the alarm was false.

The next morning passing through Belford (nothing like the name either in strength or beauty, it being the most miserable beggarly sodden town, or town of sods, that ever was made in an afternoon of loam and sticks), there I stumbled upon Mr. Murray one of the cup-bearers to his Majesty, who had taken up the very and only room in the only alehouse. Thither he kindly invited me, to a place as good as a death’s head or memento for mortality, top and sides being all earth and the beds no bigger than so many coffins. Indeed it was for beauty and conveniency like a covered saw-pit. Our host was a moving uncleanly skeleton; I asked him who had condemned him thither. He said, durum telum necessitas (necessity is a hard weapon). That he with fourscore other gentlemen of quality (a horse troop) being billeted the night before at a little village three miles further, coming to the place after a long and weary march, found no other accommodation than a dark and rainy night; in all the town not one loaf of bread nor quart of beer, not a lock of hay nor peck of oats, and little shelter for horse or man, only a few hens they roasted and eat without bread but not without water. Their horses had nothing.