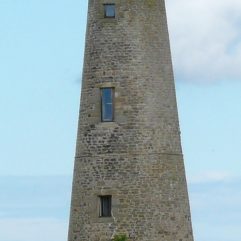 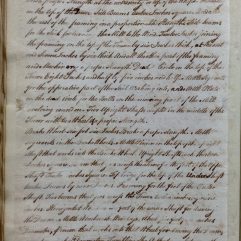 A dovecote or a mill? The reasons for building Spindlestone Duckett have been a subject of argument over the years.

In 2017 volunteers for Belford Museum visited the National Archives to look at the Greenwich Hospital records for the Spindlestone and Outchester Estates. Amidst the many letters recording the history of the Estates, they found the answer in a letter sent by the Greenwich Hospital Receivers Nicholas Walton and Joseph Forster to the Spindlestone Bailiff, John Dinning of Newlands:

‘We have at last got the dimensions of the Tower for Outchester and Borewell Threshing Machines and desire to have an Estimate, for as the Dimensions are alike, one Estimate will do. Mr. Cargey agreed to Build his Tower at his own Expence & to pay eight per Cent for the Money expended in erecting the Wind Machine, and Mr. Weatherly agreed to pay 8 per Cent for the whole expence, the Hospital to build the Tower & both of them to engage to keep and deliver of the whole in good condition.’

Who was Mr. Weatherly?

The Weatherly family originated as tenant farmers in Berwickshire. John however chose to become a flour merchant, and opened a bakery business in Berwick upon Tweed. There he married Mary Whitehead and together they had four children. In 1786, however, when Mary died following the birth of the 4th child, John gave up his businesses in Berwick, and in 1795 took a 21 year lease on Outchester Farm from Greenwich Hospital. So it was for him, described as ‘a very substantial tenant’ that the estimate for the Threshing Mill was wanted.

The required estimate was obtained. It was for £535 (today’s equivalent would be approximately £40,000).

When the Receivers asked the Greenwich Hospital Board to approve the expense, the Board was not convinced. Two more letters were sent, explaining that Weatherly had previously provided his own threshing mill which had insufficient power. This first threshing mill was probably one worked by horses, as the third letter stresses the benefits of a wind driven mill over a horse driven one.

The Benefits of a Wind driven threshing Mill

‘The advantages arising to a Farmer from a thrashing Machine going either by Wind or Water are very considerable as he is thereby enabled to have  his Horses either a the Plough, carrying his Manure to the Field or any other employment, at the same Time that the Thrashing Machine [is] at Work, and besides another very great benefit is derived by the saving of his Horses, for experience now shows that those Machines tho’ in other respects very beneficial are found to be exceedingly injurious to the Horses……’

At length, the Board was convinced, and the contract to build the mill  and install the threshing machinery was awarded to John Dunn, Millwright of Coldstream. The mill had five sails, diameter 50 feet, attached to a wooden framing on top of the tower which could be turned to take best advantage of the wind. It was this building, on the very boundary  of Outchester farm, which resulted in the tower we see today.

It would be good to record that at such a phenomenal cost, the mill was a great success. But sadly not so. When, in 1817, the Greenwich Hospital Board ordered an inspection of the Spindlestone Estate, the Inspectors described ‘a Wind Threshing Mill and Machine, built 10 years ago, all in bad repair’.  In 1820, when the new tenant at Outchester applied for the Hospital to repair the mill, the Receivers decided instead to replace it with  a more modern steam driven threshing machine. Nevertheless a valuation had to be made of the old mill. This valued the machinery at £106. 9s. 0d., a quarter of its original cost – an early case of apparently ground breaking technology becoming obsolete!

Life at Outchester, immediately before the building of the Mill is described in the Diary kept by John Weatherly’s daughter, Eleanor,  presented by Joan Wright as ‘Eleanor’s Diary’ and published by Wanney Books in 2014. Copies obtainable from Belford Museum at £9 – belfordmuseum@gmail.com