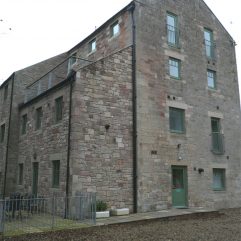 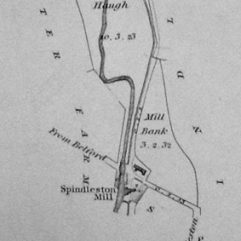 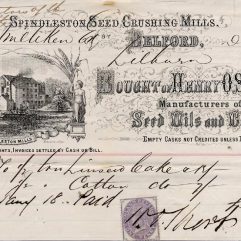 The Spindlestone Mill buildings on the Waren Burn, inland from Budle Bay, had their origins in a mediaeval water mill believed to have been on the same site.

The first definite reference to a mill at Spindlestone occurs in 1302 when it formed part of a disputed inheritance in a case brought before King Edward 1. Forty five years later, it was again the subject of a court case, this time when Crown had confiscated the mill because its tenant John de Muschamps, had supported the attacking Scots. By the mid 14th century the Mill was in the hands of the de Colville family, and in 1387 was worth a yearly rent of  £6. 13s. 4d.

The Mill passed by marriage through various families until in 1662 it came into the hands of the Radclyffe Earls of Derwentwater. James, the third Earl, mistakenly supported the 1715 Jacobite rebellion, losing both his lands and his life as a result. The lands, including the Mill, were confiscated by the Crown, and in 1735 granted to Greenwich Hospital who were to remain the landlords until 1872.

There is no reference to a working flour mill at Spindlestone in the 18th century until 1766. Then the tenant, a Robert Smart, who had a reputation as a mathematician and inventor, seems to have undertaken the renewal of the mill, with records of millstones being brought from Newcastle quay, and the building of a new footbridge at the Mill. The developments must have been successful as in 1774, Inspectors from Greenwich Hospital recorded:

Appurtenant to this Farm is a Corn Mill let to the Tenant…at £20 per annum which appears to be in good condition.

Six years later, the mill was largely rebuilt for the new tenant George Hall, and a second mill driven from the same water wheel, was added for crushing barley. The Miller’s house was rebuilt the following year. Despite all the work which had been done, in 1783, George decided to surrender the lease, claiming the rent (£400 per annum) was too high.

The new tenants were William Watson and Son, established millers and grain merchants. They concentrated their milling at the newly built mill at Waren. They held on to Spindlestone mainly to prevent any competition to their business. In 1789, however, with milling going well at Waren, the Watsons decided to extend their business to the Mill at Spindlestone, and spent £200 preparing it to grind oatmeal and barley. Despite the money which had been spent on it, Spindlestone Mill remained  very much the lesser mill. In 1805 Greenwich Hospital inspectors described it thus:

SPINDLESTON MILL, situate some distance up the stream, has two pair of stones and a small water-wheel; and it contains a kiln and store room, near to which are three cottages with lofts over them used as granaries; the mill is old as are the last mentioned buildings, but they are kept in tenantable repair.

The Watsons’ tenancy ended in 1810, and for the next decade, Spindlestone Mill was allowed to become derelict.

Spindlestone’s situation changed when the tenancy of both Waren and Spindlestone Mills was taken over by the Nairn family in 1820, and Mr. Nairn’s younger son Philip took charge.  He lost no time in getting the Mill at Waren working effectively, and then decided to extend the business to Spindlestone. This was to be used for milling flour for local customers  (while the business from Waren was for export). Spindlestone  was also to be equipped to make oatmeal. Presumably this was what happened, but apart from repeated requests that Greenwich Hospital provide a new drying kiln, the Mill does not feature again in the records until 1854. Then, following a fire at Waren Barley Mill, Philip decided to adapt the Spindlestone machinery to grind barley. This was to be one of Philip Nairn’s last milling decisions – two years later he surrendered the tenancy.

Fire at the Mill

In February 1864, Spindlestone Mill caught fire. The miller, wakened  in the early morning by the smell of smoke, raised the alarm. Although fire engines were sent for, they arrived too late to prevent the collapse of the roof and destruction of the machinery and stored grain. Despite insurance, Short lost about £560 in the disaster. As the shell of the mill and its water wheel had survived, Greenwich Hospital agreed to rebuild the mill, but now it was to be fitted out only to grind oats and barley.

Increasingly the manufacture of oatmeal was subject to stiff competition from Scotland where oats were more readily available. Having assessed the situation, in 1865, Henry Ogle Short decided to convert Spindlestone to the manufacture  of Linseed Oil and Cattle Cake. This seems to have been a wise decision as bills for the supply of cattle cake to local farmers survive for the next twenty years. A Greenwich Hospital Survey of 1870 describes the Mill at this time:

Spindleston mill consists of 4 floors; it is dry in summer, down to 2-horse power, and in winter it is sufficient for 14-horse power. Boiler-house adjacent, granary in good repair, three cottages of one room each, garden to each house. The first floor contains 3 pairs of stones. There is also a kiln, water-wheel and tank out of repair. Complete machinery for crushing oil seed and 2 treble sets  of presses belong to the occupier.

Shortly afterwards the entire Spindlestone Estate, including both mills, was sold by Greenwich Hospital to Major Alexander Henry Browne.

Thomas Black Short succeeded to the mills on his father’s death in 1878. Soon after he took over, in February 1879, Spindlestone Mill again burnt down, but was rebuilt by the new owner with the insurance money.  It seems that this rebuilding included machinery for milling both corn and oats, since in 1886 Spindlestone won the contract to provide Belford Workhouse with bread, flour and oatmeal.  Increasingly the Mill concentrated on milling oats and barley and storing grain for the business as a whole. Browne’s estate was sold on his death in 1910. At that time, although Thomas bought Waren Mill, he chose not to buy Spindlestone preferring to develop the family’s Tweedmouth business which continues to this day. From then on, Spindlestone Mill seems to have fallen into disuse, until its revival as attractive holiday accommodation, towards the end of the 20th century.