In 1735, George II gave Spindlestone Estates to Greenwich Hospital to help complete their buildings, and care for sailors and their dependents. The lands, previously held by the Radclyffe Earls of Derwentwater, had been confiscated by the Crown after the defeat of the 1715 Jacobite Rebellion.

To run these Estates and collect the rents, the Hospital Board appointed officials known as Receivers. Among these Estates, Spindlestone and Outchester, which included the tenanted farms of Glororum, Spindlestone, Outchester and Chesterhill, together with the coastal settlement of Waren, was seen as one of the best, with rich agricultural land, coal and lime resources, and good sea links to the rest of the country in days before reliable road transport.

For the next 137 years, the Receivers managed Spindlestone and Outchester to provide good returns for the Hospital. They worked with the tenants to enclose and improve the farm land, encouraging the use of new crops and machinery. They also tried to bring industry to the area. In the early 1780s the Receiver, Nicholas Walton junior, worked with the Civil Engineer, John Smeaton, to build an innovative water mill at Waren. This and the neighbouring mill at Spindlestone processed local grain, provided flour for the community, but also a significant export trade from Budle Bay.

Although charged with ensuring that all the Derwentwater estates provided an income for the Hospital, the Receivers also took their, and the Hospital’s, responsibilities for the tenants very seriously. In April 1782 Nicholas Walton wrote to the Board that it was not consistent with the dignity of the Hospital to destroy tenants by forcing them to pay rents they could not afford. In 1821 when the young farmer at Glororum, Alexander Thomson, lost farm buildings and crops to fire, the Receivers successfully encouraged him to petition the Board to make good the losses without cost to him. A later Receiver, John Grey, acted as a mentor to several of the less experienced tenants.

The Value of the Estate

The coal seams which had made the Estate initially attractive were very soon exhausted. There continued to be a plentiful supply of lime to improve the land and for building, but as the 19th  century progressed both new ways of fertilising ground, and new building materials, made the lime less valuable.

The building of the railway from Newcastle to Berwick in the 1840s brought significant change to the area. The quicker and better transport links provided farmers with more choice of markets. As a result the importance of the mills declined, along with the ports on Budle Bay. At the same time, the rapid increase in imported grain from North America and Australia reduced the importance of local crops, and limited the ability of the Receivers to improve the income from Spindlestone and Outchester.

Sale of the Estate

In 1872, after a survey of the Estate, the Greenwich Hospital Board concluded that there was little chance of increasing their income, and put the Estate up for sale. It was bought by Major Alexander Henry Browne for £116,000. 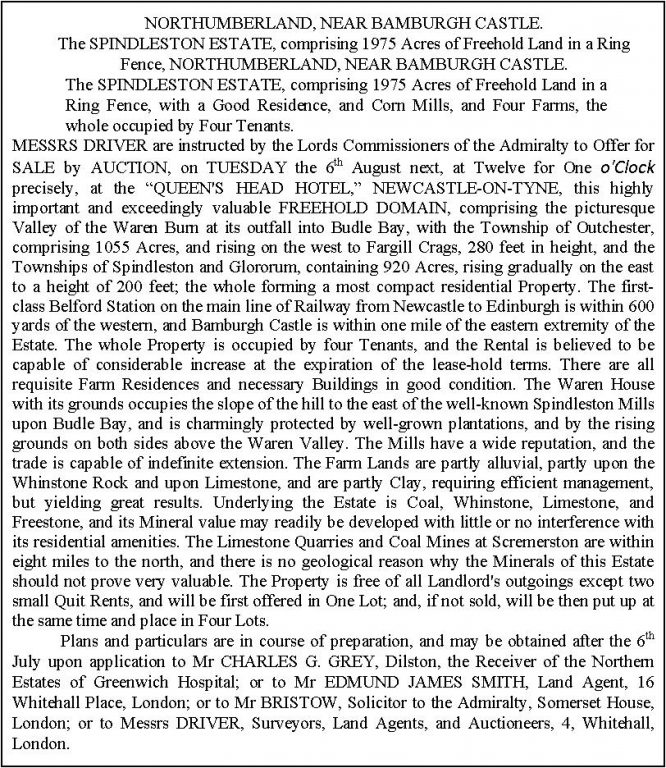