Living conditions at the Cocklawburn Cottages, 1912 to 1956 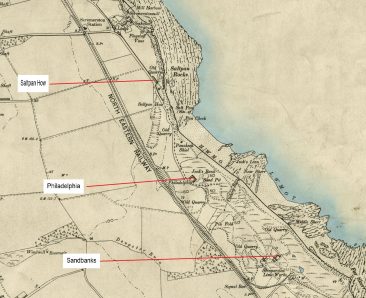 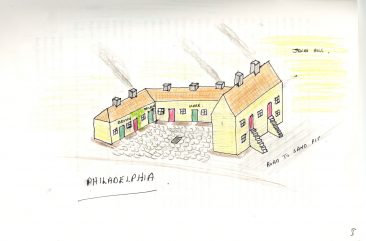 Today Cocklawburn is an area where people go to walk along the beach and marvel at its geology. Its nearest visible settlement is Seahouse which was once the home of the ? family. However, in the 19th and early 20th centuries, there were three thriving communities here which are not visible today – Saltpanhow; Philadelphia and Sandbanks –  whose residents were employed in the limekilns or latterly worked at Scremerston Colliery. The houses in these settlements belonged to the Greenwich Hospital but were leased to the Scremerston Coal Company.

As part of her work on the Peregrini Project, Julie Gibbs undertook research on living conditions in these settlements,  consulting various sources including Norham and Island Rural District Council minute books; local newspapers; electoral registers and a personal account by Thomas Brown of his memories of the area to find out what the properties were like and who lived there. Although in poor condition, people were still living in these properties up until 1956 when the last residents, Mr and Mrs William Bruce left. On 18th February 1954, an article entitled “Only a spark of life flickers where once a thriving village flourished”. This extract provides a flavour of what it was like by then :

Half a century ago, two dozen houses were the houses of more than 70 people who made their living either by working at the kiln or on the old Scremerston Colliery ….

Today, their ghosts look down on a picture of semi-desolation. One house out of 24 is occupied. Kept clean & tidy, it has been the home of Mr & Mrs William Bruce for the past 17 years. But there is no guarantee how long it will last. ‘The house is condemned. When we get new accommodation, goodness knows what will happen to the cottage. It may be pulled down or just left until the weather demolishes it like the others,’ they said on Friday.

Mr Bruce was born in the little coast community & he has lived there all his life. He has seen the change from a thriving little centre of industry to the present picture of quiet & peace.

At Saltpanhoe stand half a dozen cottages, sloping down towards the rocks & the relentless breakers of the sea. Their roofs are off, red tiles litter the floors, & only the walls remain. Even they have taken a pounding  from the wind & rain, & though it is little more than 6 years since they were occupied, succeeding storms increase the desolation.

Further on, stands  a fishing shiel, its red roof bringing a splash of colour to the scene. It’s still in use, though its doors and windows are off and it stands exposed to the elements.

A few hundred yards of road past quarries and grassy dunes bring one to the home of Mr and Mrs Bruce. Their cottage is very conspicuous, with its neatly slated roof, & the smoke curling up from the chimneys.

It is more conspicuous as it stands alone – a link with the past. Within feet are more ruined houses, & a battered shell which was once a combined blacksmiths & joiners shop. Looking out of their windows, they can see the derelict kiln covered by grass and weeds. Many bricks have tumbled down and the holes into which the lime was poured are almost completely filled up. A humane reason for that: Mr Bruce said ‘Just after the end of the war, soldiers came & cleared away all the barbed wire & spikes which had been placed along the dunes in case of invasion. They dumped it down the holes, and seagulls got caught and they were requested to fill them in, and this was duly done’.

Signs of the brickworks, telegraph poles to the manager’s cottage & the ralway which daily carried the finished products to the main line are almost invisible now.

Read Julie’s article on the living conditions at Cocklawburn Cottages, 1912 to 1956 by clicking on the link below