Holy Island lies just off the coast of north-east Northumberland. Home to and subsequently the cult centre of St Cuthbert, and the place where the Lindisfarne Gospels were created. Compared to sites such as Iona or Jarrow, there has been relatively little excavation in the immediate vicinity of the probable site of the Anglo-Saxon monastery.

In the summer of 2016 a joint project, run by Durham University and DigVentures and co-directed by David Petts (DU) and Brendon Wilkins (DV), undertook a short campaign of evaluation, ground-truthing a series of features identified by a major geophysical survey on the island carried out in 2012. This work has allowed the team to home in on probable areas of early medieval activity and to identify key priority areas for further work in forthcoming seasons. 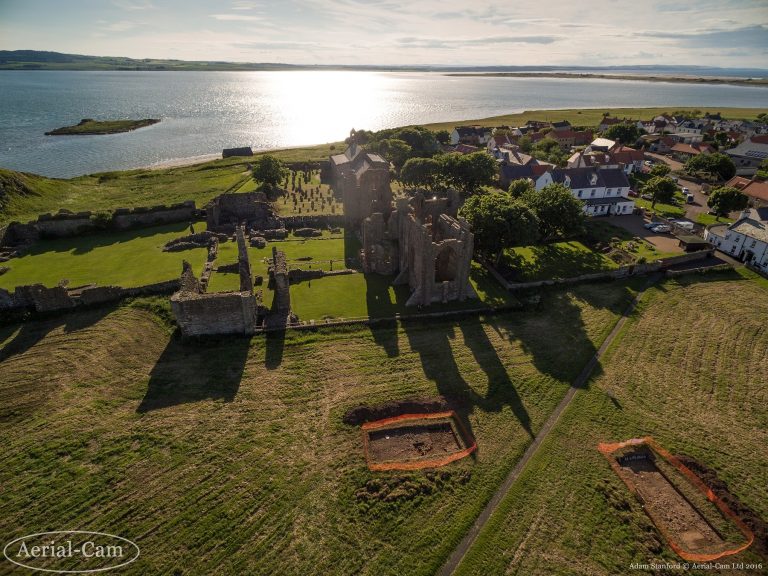 Trenches 1 and 2  were excavated to the east of the Priory Church in the field known as Sanctuary Close. Until the 17th century this was bounded on the east by open water with the current line of the current small harbour only emerging in the 18th century when the land behind it was drained and reclaimed. No structures were identified in Trench 1, although a small area of flagged stone surface survived. Finds included  a silver sceat of Eadberht.              (AD 738–57). This the second such issue to have been found on the island, with another example recovered during excavations on the site of the English Heritage Visitor Centre a short distance to the north. Although small quantities of medieval and post-medieval pottery were recovered from the topsoil of the area of Trench 1, none came from the excavated features. Drawing on the coin, however, the most likely date for this relatively ephemeral area of activity is early medieval.

Trench 2 was initially unprepossessing but it was soon realised it contained fragments of redeposited human charnel, which subsequent analysis gave early medieval C14 dates.When further analysed these bones were shown to contain the remains of at least two adults, two young juveniles (aged between 1–6) and one foetus/perinate. A significant number of quartz pebbles were also recovered from this deposit, in a number too high to be viewed as a natural background presence. The use of quartz pebbles over early medieval graves is well attested from burial sites in northern Britain. The Trench 2 rubble deposit also contained three fragments of worked stone. One was part of a simple stone cresset lamp with clearly visible scorching. 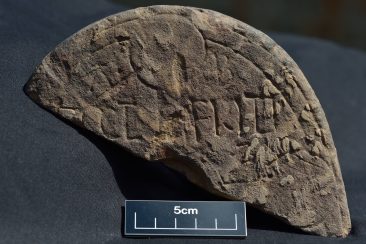 The second was a piece of an early medieval carved name stone. These distinctive burial markers are only found at Lindisfarne, Hartlepool and a small number of other sites in north-eastern England. Like the 14 other name stones from Holy Island, this example had a rounded, rather than square, head.

The second sculptural fragment is part of a cross-incised carved stone. It is not easy to find parallels to this stone from among the existing repertoire of early medieval stone sculpture from Anglo-Saxon England or from Scotland. Gleann na Gaoith (Islay, Argyll) has two crosslets flanking the extended top arm of an outline ring cross, while another fragmentary cross, also from Islay, has a ringed cross with flanking crosslets within the ring. Finally, there are parallels with a group of stones from Inishmurray (Co Sligo, Ireland), although the Lindisfarne crosslets are not as expanded as these Irish examples. 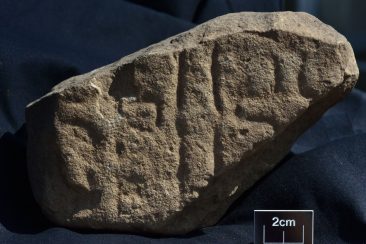 In the final stages of our excavations a number of stone settings began to emerge from beneath the rubble layer, with one having a large fragment of cranium at one end. These are likely to be stone-lined cists, but they were not excavated due to pressures of time. The radiocarbon dates give a broadly late 8th- to early 10th-century date, thus frustratingly straddling AD 875 (the conventional date for the departure of the monastic community from the island).The reasons and the date for the event that led to the partial destruction of the cemetery are not clear. Potentially it occurred at some point during the construction of the adjacent medieval priory or even later. However, an intriguing parallel lies with the assemblage of damaged 8th-century Pictish sculpture recovered dumped over an area of burnt-out workshops in the Glebe Field.

Based on the modelling of the radiocarbon dates taken from this deposit, it is likely to have been deposited between AD 780 and 810. Trench 3 was located in Glebe Field, a large paddock lying along the western flank of Lindisfarne village between the landward coast of the island and the street known as Fiddler’s Green. A 2 m × 20 m trench was placed here in order to examine a potential boundary associated with the early monastery. The geophysical survey had shown that the the excavation actually revealed clear evidence of structures lying to the south of what appeared to be a flagged-stone pathway, while to the north lay an intercutting sequence of large pits. Although only a thin section was cut through this complex sequence of structures, the remains appeared consistent with medieval buildings. It is apparent from the initial analysis of the ceramic assemblage recovered from these features that they date to broadly the late 13th to mid-14th centuries. It is apparent that Holy Island village was one of the very few genuinely coastal settlements on the northern Northumberland coastline, with most other coastal parishes having their cores set back from the shoreline, with fishing villages only emerging on the coast itself in the post-medieval period. This was the second excavation to have taken place in the fields running along the western side of the village. Excavations carried out by Brian Hope-Taylor in the early 1960s in Rectory Field, a paddock to the west of the parish church, also revealed significant evidence of medieval occupation. Together, the evidence from the 1962 and 2017 excavations makes it clear that the medieval village once extended up to the modern western shore of the island.

The 2017 excavation continued and expanded the 2016 Trench 2, which had previously revealed human charnel and two fragments of sculpture of early medieval date. On removing further layers of mixed rubble and human bone a series of intact graves were identified to the east of the trench. Two were fully excavated. The bodies were lying west-east on their backs with their hands crossed over their pelvises. They were also associated with scatters of white quartz pebbles. Nearby are a number of settings of stone which may also mark other graves. Associated with this cemetery area was part of a large stoner wall (Drystone) of unknown date- it was not possible to determine the relationship between the graves and the wall. In the western side of the trench parts of a small wooden building were identified- this appears to have been constructed by a combination of beam slots and post pads and is paralleled by other buildings at Middle Anglo-Saxon monasteries such as Hartlepool, Hoddom and Whithorn. The structure appears to have been aligned roughly west-east. Finally a large spread of animal bone was identified- amongst the usual mix of cattle, sheep and pig, a number of seal bones were also identified indicating that the Anglo-Saxon monastery was probably exploiting herds of seal local to the island.