First established in November 1870 as The Holy Island Public Reading Room and Library; after the death of Robert Crossman in 1873 the buildings being used as the library were granted as a lease to the Trustees of The Robert Crossman Charity which had been established in accordance with his Will, and with £1500 being bequeathed to the Charity. 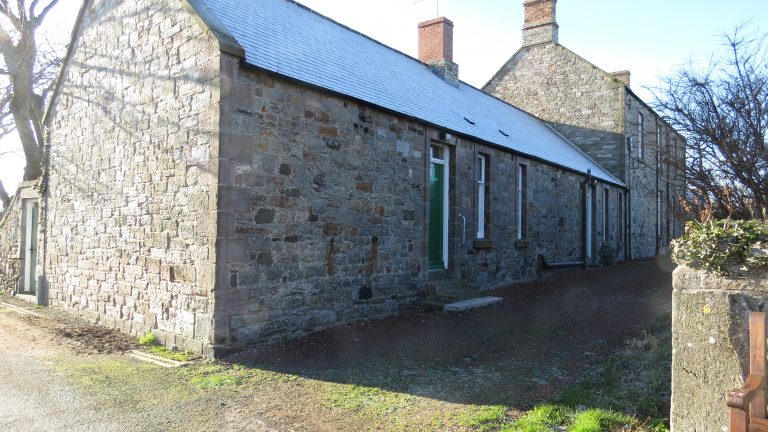 The Committee and Trustees.

The original Library Committee in 1870 had a President, two Vice-Presidents one of whom was Robert Crossman, three Trustees one of whom was the Vicar, a treasurer and six other members. A total of thirteen. The schoolmaster was employed as librarian and secretary. After 1874 the Trustees consisted of William Crossman,The Lord of the Manor and Robert’s son; the Vicar; the Harbour Master; the Chief Pilot and the Peoples Churchwarden. 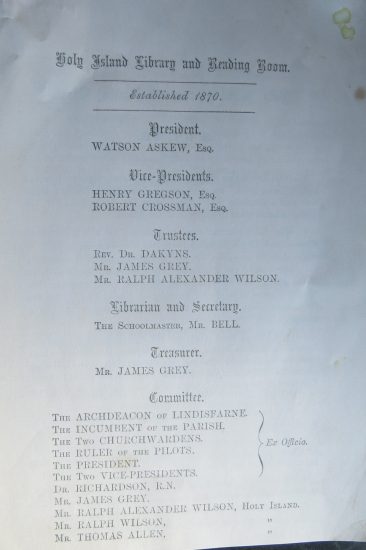 As laid down in the terms of the Robert Crossman Charity the purpose was To provide Literary Instruction and amusement, books, papers and periodicals for fishermen and other inhabitants of the said island with an annual sum of £30 paid by the Crossman Estate to the charity for its maintenance.

The original Rules in 1870 other than those covering its name, the make-up of the committee, the lease of the building and procedural matters, laid down disciplines to be followed and the penalties if they were not. For example:

No smoking or drinking shall be permitted in the Library or Reading Room.

It shall be in the power of the Committee at a general or special meeting to expel any subscriber for blasphemous, indecent, or obscene language; or for violent, or quarrelsome conduct; or for any cause declared by the Committee to be deserving of expulsion.

No-one shall be allowed the use of a paper more than 10 minutes after another subscriber has expressed his wish to read it.

Any stranger or visitor may enter the Reading Room and read the papers, by paying One Penny each visit into a box kept in the Room for that purpose, and called the Visitors’ Box.

Every subscriber shall be held responsible for the safety of any Book he may have from the Library; and for any loss or damage, the Committee shall inflict a fine according to the value of the book.

Any subscriber who shall take out any Newspaper belong to the Reading Room, shall be fined at the discretion of the Committee.

The Committee look to the subscribers to assist them in keeping order, and to expose at once any improper acts they may observe, tending to the annoyance of subscribers or the infringement of the rules.

The accounts for 1887 which can be reached by this link give an idea of the activities in the early years.

Some excerpts from the Minutes.

October 6th 1901. The Meeting was called to investigate cases of misconduct on the part of several members. It was unanimously resolved that Robt. Henderson, Geo Henry, Peter Markwell & John Allison be suspended from the Reading Room until 25 Mar 1902.

September 26th 1906. Mr Grey be asked to fix the bagatelle table and that the Secretary procure 10 packs of cards at 1/. each and order Nautical Almanac.

March 26th 1915. Proposed that a War Map for the wall be purchased by the secretary and also a map of the Dardanelles – carried and that the age limit be lowered to 15 – carried

January 19th 1916. Discussed The destruction of the furniture and fittings of the Reading Room including the glass and shade belonging to the lamp, broken chairs and damage done to the ceiling of the bagatelle room.

In those early days there were discussions from time to time about whether girls could be members, eventually they could! The damage noted in 1916 was not an isolated case, the bagatelle table frequently being in need of repair. As well as being a Library and Reading Room it was as an active Games Room.

Following the opening of the causeway and the installation on the island of piped water and electricity in the 1950’s, on September 17th 1960 It was unanimously agreed to ask the S.S.E.B and Hargreaves of Berwick to estimate for electrifying the Reading Room.

Gradually the Reading Room was used less and less with income falling and the costs increasing. By the early 1990s the Trustees were wrestling with the problems of a building in need of substantial repairs and in the minutes of March 4th 1994 it was noted that if insurances and rates are paid there is nothing left and after detailing the work needed that no money was available for these repairs.

A solution was found when Marygate House agreed to lease the Reading Room for their use and to carry out the repairs, while continuing to make it available for use by Islanders. The minutes of March 6th 1998 report The Reading Room had been brought back into use in 1997 and was being used for various meetings of groups on the Island. The running of the Reading Room and its upkeep has been done by the Trustees of Marygate House. 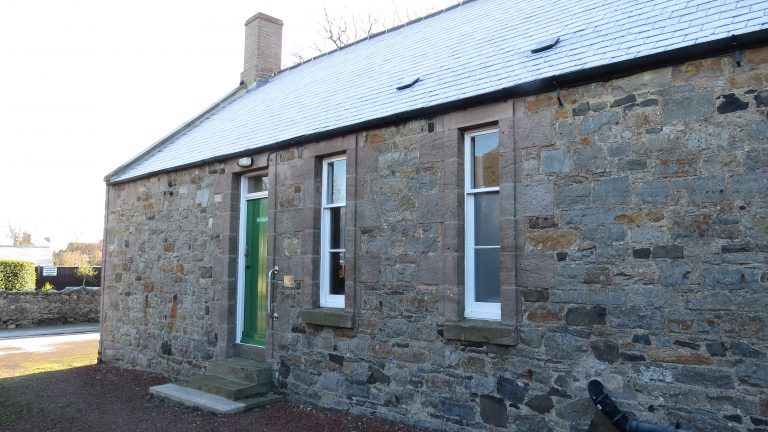 In 2017 as part of the Heritage Lottery Funded Peregrini Lindisfarne Landscape Partnership, the establishment of an Island Archive was proposed and the minutes of the Trustees on April 5th 2017 show A proposal to house the island archives in the Reading Room premises was adopted; this would be undertaken in conjunction with HLF Peregrini Lindisfarne Landscape Partnership.

The work to completely re-roof the building and to create two rooms; one for the archive, one as meeting and reading area and, for the first time, adding toilet facilities and a small kitchen area was completed in 2018. The completion of the building work was marked by an opening ceremony on October 17th performed by Jane Crossman; taking over from Lady Rose Crossman who had been an enthusiastic supporter of the project but, sadly, had died before its completion.

The final stages will be completed in 2019 with the installation of IT equipment, broadband and physical archive material. The facility is due to be available for public use as soon as possible after the expiration of the lease with Marygate House at the end of March.