Much of what has been written about Holy Island’s fishing history is based on 19th century descriptions. At that time the newly-industrialised herring fishery was exerting significant impact on Northumberland’s coastal villages. But alongside this, a much older ‘artisan’ fishing economy continued, elements of which persisted well into the 20th century.

Together with the tiny cell on Farne, Holy Island’s monastery supplied fish to its mother house at Durham throughout the late medieval period. Work on monastery records from the 14th to the 16th centuries by Katrina Porteous and Dr Adrian Osler shows much that would have been familiar to Island fishermen in the early 20th century. Before World War II Islanders were still catching most of the species listed in the monastic accounts, and few that were not. The medieval records of fishing gear are also consistent with much later times, suggesting a mix of line and net based fisheries, shell fisheries, and the use of boats described as ‘cobles’ as well as larger vessels

After the dissolution of the monasteries little is known about fishing on the Island for over 200 years. The highly-organised medieval fisheries indicate that some individuals might have continued to depend entirely upon fishing for a livelihood. 27 fishermen were said to live on Holy Island in 1626 and in the late 18th century there were between 10 and 12 herring boats.

19th century descriptions of the Island’s fishing year suggest continuation of the medieval pattern. Fishing was seasonal: the mainstay was highly-priced white fish such as cod and haddock, caught on long lines from October until March. Shellfish were trapped, using nets or ‘trunks’, and later creels. Sailing fishermen knew exactly where to ‘shoot’ their gear from lining up landmarks, which were handed down. In addition, between June and September, herring were caught using nets. Until the 19th century, the price they fetched was very low, because oily fish were difficult to preserve.

As in the medieval accounts, two boat types were deployed, a small open ‘coble’, and a larger vessel for deeper water. By the later-19th century this was usually a Scottish sailing ‘Fifie’ or ‘keelboat’ used for herring fishing. As keelboats evolved in size and design, speed and catching power increased. Among the largest and latest Island keelboats were Robert Lilburn’s Children’s Friend (53.3ft) and Thrive (57.4ft). 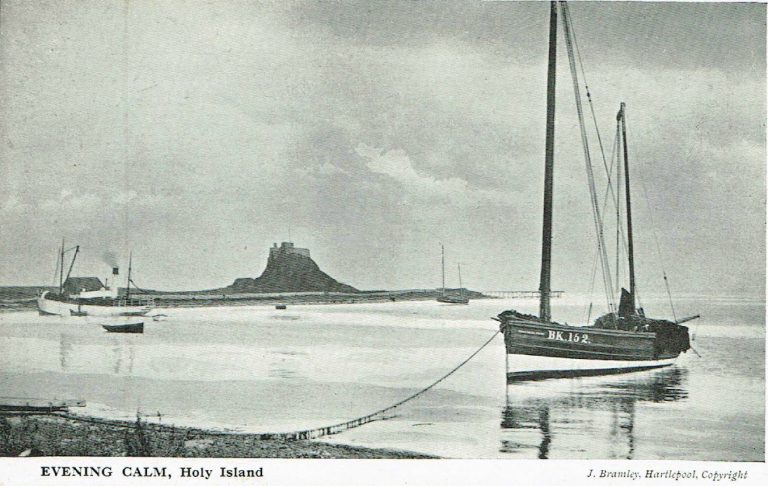 In what was still essentially a medieval family economy, Island women worked throughout the year as the land-based half of the fishing partnership. Women did not go to sea but were occupied in the unpaid work of baiting around 1,400 hooks on each line, preserving and selling fish, and mending gear. Even the children worked, gathering bait. According to contemporary accounts, the Island was lively, insalubrious and odoriferous. Living conditions were primitive, fishing dangerous, and fishing families’ lives economically precarious.

Meanwhile, the 18th century had seen the adoption, in some Northumbrian ports, of aspects of ‘industrial’ fishing practice and more distant markets. The Tweed salmon net fishery was highly capitalised, organised and productive, driving expansion in other areas. Highly-priced white fish were also exported live to London from several Northumbrian ports, including Holy Island, in smacks containing wells.

In the later 18th and early 19th centuries new practices in herring fishing and curing, adopted into Scotland from the Dutch, together with rigorous new regulation, opened new markets overseas. This industry expanded rapidly down the North East Coast. By the 1860s and ’70s, Holy Island supported 27 five-man herring keelboats from a population of between 70 and 84 fishermen supplemented by casual ‘half-share men’.

Herring were caught at night using fleets of ‘barked’ drift nets. They were hunted by ‘signs’ such as whales blowing, gannets diving, and their phosphorescence or ‘fire’ in the water. Although extremely hard work, herring fishing held a particular excitement, because it was always unpredictable and occasionally highly profitable. The earlier herring were landed, the better the price. Big catches, however, meant that prices plummeted, and a skipper might have to dump his entire catch.

By the 1860s the Island had two herring yards run by curers from Spittal, one above the Ouse, the other on Sandham Lane. Herring were unloaded from carts, into troughs called ‘farlins’, where they were gutted and sorted by women workers. The yards were overseen by ‘coopers’. The women packed most of the herring into barrels with layers salt, which preserved them for export. As an alternative method of preservation for the domestic market, some herring were split and smoked, or ‘kippered’. Unlike their informal work in the family economy, women’s role in the herring industry was organised and paid. Teams of professional ‘herring lasses’ travelled from Scotland as the shoals moved south, and Island women joined them.

Once packed, barrels of salt herring were inspected, branded and exported by sailing ship to Germany and Russia. It was said that ‘a man could walk on upturned herring barrels for half a mile’ from the Ouse to the castle.

The End of the Herring Fishing.

The industrialised herring fishery brought prosperity to the Island in summer, but the season was short, and the industry itself lasted little more than a century. By 1913 only two Island keelboats remained. Catches were poor and prices low. Many blamed steam trawlers for destroying the herring spawning grounds. In addition, sailing keelboats could not compete with the new steam drifters. 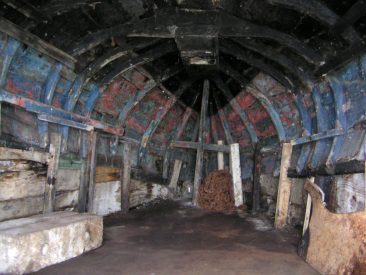 The interior of an upturned herring boat used as a boathouse.

By the time World War I closed the Baltic market, the Island’s herring industry had ended. Naturalist Richard Perry describes the old keelboats drawn up on the Ouse, and photographs show fishermen manhandling half a keelboat into position at the castle to serve as a shed. This upturned boat, and those at the Ouse, now form a unique collection of historic vessels.

After its herring industry ended, Holy Island’s much older long line fishery, and its shell fishery, continued. These were pursued from its traditional boat, the coble, which readily converted from sail to motor. 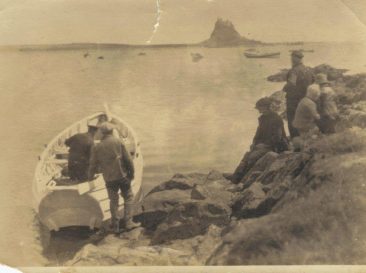