Letters Patent and Coat of Arms

Few communities the modest size of Holy Island can boast of possessing their own Coat of Arms. In 1958 the Northumbrian Motor Club offered to finance the creation of Arms for the Island and discussions began with The College of Arms in London.

The design of the Arms began at The College of Arms where Mr J.P. Brooke-Little drew up initial ideas which, on October 24th 1958, he sent to the Reverend T.J. Martin who was representing the Motor Club. Reverend Martin presented them to Holy Island Parish Council for consideration at their meeting on November 7th. The Parish Council had their own ideas and replied to Mr Brooke-Little on December 1st.

We found it difficult to put our ideas in words but we are so lucky to have a resident among us now, the well known London Artist Miss Louise Davies. She has kindly executed two sketches (enclosed) which show pictorially our ideas.

A compromise had to be found between these ideas and what was allowed under the strict rules of Heraldry; as the Parish Council well understood.

We realise that the College of Arms is the final arbiter. They may not, for instance, conform to the traditions of Heraldry but we would ask you, if possible, to embody some, if not all, of Miss Davies details.

In his reply of January 13th 1959, Mr Brooke-Little rejected one drawing out of hand as

…..such a coat could not be granted as it in fact contains three separate coats, the barry wavy coat with the cross, the ruined abbey and the fishing boat….

The second drawing he said was more acceptable, but only with modifications which made it closer to his original drawing.

The Parish Council responded politely but robustly on January 22nd, insisting that the Rainbow Arch which Mr Brooke-Little has queried should be shown, even if symbolically, and that the colour of the Monk’s Robe which had been questioned was correct as proved by finds of fabric in recent excavations. Mr Brooke-Little was asked to redraw the Arms.

You are the final arbiter in this matter, but we are sure you will give our further thoughts due consideration.

While the discussions on the design of the Arms were ongoing, the Parish Council asked Hugh Ashdown, the Bishop of Newcastle, to choose a suitable motto and he selected a passage from the Old Testament. Isaiah Chapter 6 Verse 8.

which translated into Latin became

The final design showes a Monk in a golden yellow robe and holding the Lindisfarne Gospels sitting on a Helmet (a standard Heraldic Image) to which is attached blue and yellow mantling (drapery) forming a background for the Shield beneath the Helmet. The Shield is illustrated with an image of the Priory; the Crown of the Northumbrian King Saint Oswald and a Saint Cuthbert’s or Lindisfarne Cross. The images within the Shield are surrounded by white and blue barry wavy lines. Beneath the Shield is the Motto.

The Arms were granted to Holy Island on June 10th 1959. And on September 18th Nellie Straughan, the Clerk to Holy Island Parish Council, wrote to Mr Brooke-Little confirming that The Letters Patent granting the Arms had been safely delivered on his behalf by Commander Grey and that

The Chairman and Councillors consider that the finished result of your collaboration with them is all that could be desired. They thank you for your patient co-operation 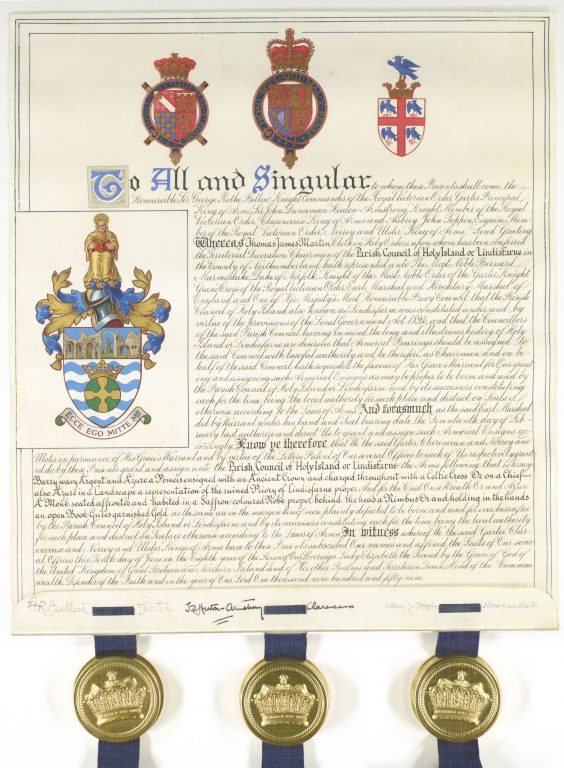 The valuable document was lodged by the Parish Council with Barclays Bank for safe keeping in 1959, where it remained until February 15th 2013 when, as the Bank was removing the storage facility, it was moved to the County Archives in Berwick.

Commissioned by the Northumbrian Motor Club, the people involved with the project were

The Arms are the property of Holy Island Parish Council and may not be reproduced in any form or for any reason without the permission of the Council.