Links golf is hugely popular on the east coast of Scotland and Northumberland and for almost 60 years from 1907 until the 1960s Holy Island had its own nine hole course on land donated by the Lord of the Manor Major Lawrence Morley Crossman.

Holy Island’s significance in the history of Christianity in the north of England is well attested with the image of the early monks as peaceful, holy and serious people. So, it is intriguing to speculate on how they relaxed. A clue perhaps. In St Cuthbert’s Church in Kensington, dedicated to St Cuthbert, there is a stained-glass memorial window which survived the bombs of the Blitz. It depicts the Saint striking a ball with a stick curved at the end to form a rudimentary golf club. 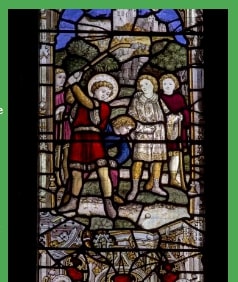 Unlike the almost certainly mythical medieval course, the location of the 20th century one is well known. Reached by the path from Chare Ends and laid out between the dunes to the north of the old Kennedy Lime Kilns, it was the idea of several islanders led by Mr H.G. Winship who gained the enthusiastic support of Crossman and the owner of the Castle, Edward Hudson. They arranged for James Braid, a well-known professional golfer from Romford and, at the time, the current Open Champion to design the course. The hard work to create it done voluntarily by the islanders.

In the Berwick Advertiser in December 1908 it states: With two exceptions, the putting greens are perfectly natural, and all are guarded with excellent natural bunkers.

James Braid himself in Golf in Queer Places described the course he had designed as follows:

The new course, one of the wildest and most natural to be found anywhere, will furnish fine golf that will gladden the hearts of the players of the heroic school. On Holy Island the making of the bunkers is a business of the utmost simplicity. You just remove the top turf, and the wind does the rest, scooping out the sand and shaping the bunker in the proper way, proving once again how golf, of all games, is most akin to simple nature. 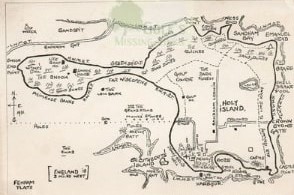 The course opened on June 11th 1907. The weather had been poor for several days, but the sun returned on the day of the opening and after a lunch provided at the Manor House by Major Crossman, he was presented with a ball and an inscribed driver. In a short speech he congratulated everyone on the hard work that had gone into creating the course, particularly Mr Winship and Mr Hudson. The latter, he reminded the competitors and spectators, had generously funded the work of Mr Braid. He then drove the first ball and declared the course open to play.

On that first afternoon an Exhibition Match between two guests of Hudson; Horace Hutchinson an ex-amateur champion and a Mr Winkworth was won comfortably by Hutchinson and was followed by an open scratch competition with 34 entrants. The prize was a handsome silver cup presented by Major Crossman to the winner, Mr Atkinson of Alnmouth with a score of 47. This was followed by a Ladies competition with 16 entrants. Miss Parkinson of Newbiggin with a score of 63 winning the pretty silver flower vase presented by Mrs Crossman.

The day which was considered a great success, ended back at the Manor House with Tea for the competitors provided by the Crossmans.

The club had an initial membership of 36 headed by the instigators and founders with Major L. Morley Crossman as President; Mr Edward Hudson as Vice-President; Mr John Gray Snr as captain and Mr H.G. Winship as Hon. Secretary and Treasurer. They were supported by a committee of nine including well known islanders Messrs B. Kyle, G. Allison, J. Wilson and J Markwell. No play was allowed on Sundays.

Of the original founders, Major Crossman died in 1908, Winship retired as secretary in June 1911 being presented with a Smokers Cabinet in recognition of his huge contribution to the club. Hudson sold the Castle and left the island in 1922.

The End of the Course

The club was active and the course well used throughout the twenties and thirties, but it suffered a major setback during the Second World War when from 1942 to 1946, it was requisitioned by the RAF. An appeal in 1947 to The Public Health Committee of the Norham and Islandshire Council for £73 10 shillings to be spent on repairing and decorating the clubhouse was rejected as not essential. Attempts were made in 1949 to reform the club and put the course back in order but it was in decline and in 1966 the abandoned course was absorbed into the new Lindisfarne Nature Reserve. 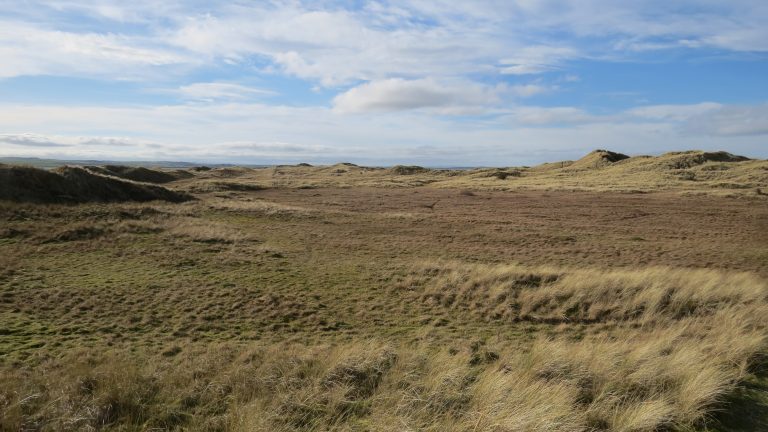