Every week, the Record Office provides a short article from the Berwick Advertiser of 100 years ago for the present newspaper and recently I found this entry:

HOLY ISLAND – With very deep regret and much sympathy the sad news was received on Monday of the death of Lance Corporal Joseph Tough, aged 25 years, at the residence of his sisters in Heaton. He had served with H M Forces in Salonica for over two years and was drafted into England a few months ago having suffered very much from malaria fever. He is to be buried in Heaton Cemetery on Thursday first with full military honours.

Home on leave for a few days last weekend were Seamen Thomas Markwell, John Markwell and Joseph Douglas, who are all looking quite well and happy.

I know Tough as an Island name and thought I would do some additional research to see what I could find out about him and his family. I was pleasantly surprised with what I found which built up quite a story about him.

Joseph Tough was born in the December quarter of 1893 on Holy Island. He was one of seven children whose parents were David and Margaret Tough. His brothers were David, William and John George and his sisters were Christina, Martha and Margaret. He was one of the younger children. His father, David was a fisherman but not originally from the Island. He appears to have been born in Aberdeenshire although his parents were living on the Island by 1871.  His mother, Margaret, was an Islander whose maiden surname was Wilson. 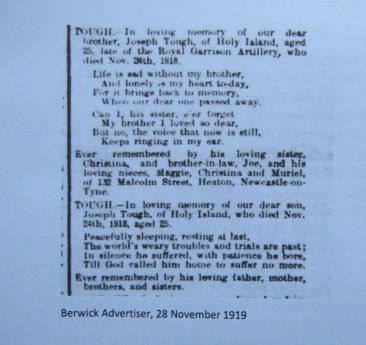 After 1911, there is no further information on Joseph until the First World War. I managed to track down his Service records online and these provided me with some additional information. Joseph completed his attestation papers on 29 November 1915 at Alnwick. In these he stated that he was an unemployed machinist living on Holy Island. He was 5’ 8 ¼” tall and entered as a Private and then became a gunner in the Royal Artillery. From January 1916 it was noted that he was to be posted and by 28 July 1916 he had embarked at Davenport for services overseas. On 7 August 1916, he arrived in Salonica. All seemed to go well at first, except for the docking of three days pay on 4 January 1917 for being late on parade. 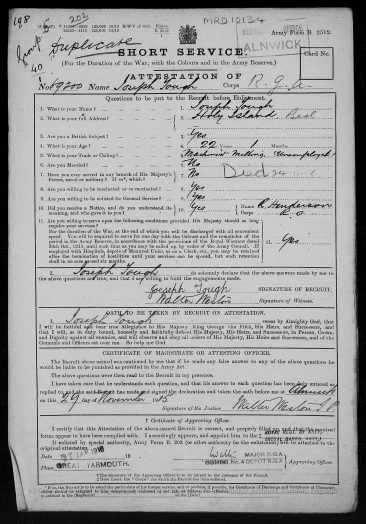 Part of his service records 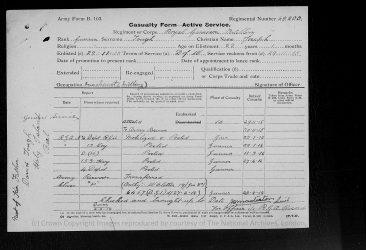 By May 1917, he was admitted to hospital with enteric fever and from then, until May 1918, he spent various spells in hospital with fever or malaria. As a result of this he had an enlarged spleen and it was decided he was unfit to continue active service in the field. He was awarded a 20% pension because of his condition. On 4 July 1918, Joseph embarked on a ship to return to the UK. This was not the end of his service as he was deemed capable of being employed on shipyard labour in the National Shipyards. He therefore returned to Tyneside where many of his family now lived to work at Hawthorn, Leslie & Co., shipbuilders in Hebburn. Joseph continued working there until 24 November 1918 when he died of pneumonia and influenza at 132 Malcolm Street, Heaton, in the house next to his brother. Joseph was then buried in Byker and Heaton Cemetery in Newcastle. His death is included on the Commonwealth War Graves site because he was still technically in a military role.

I tried to take the family forward to see what happened to the other siblings. The 1939 register records the brothers David and William living in Newcastle whilst the youngest brother, John George was on Holy Island working as a fisherman. The parents had died by 1939 but I am still trying to ascertain an exact date for both of them.