Holy Island Harbour or more precisely The Ouse was protected in the late 17th Century by two fortifications. Lindisfarne Castle on top of Old Beblowe to the east and Osborne’s Fort (or Steel End Fort) standing on the Heugh to the west. The latter structure is now in ruins. Both sit on the Lindisfarne Dyke of dolerite (whinstone) rock, an offshoot of the Great Whin Sill.

The late 17th Century was a tumultuous time. In 1660 the Monarchy was restored under Charles II. In 1665 one-sixth of London’s population died of plague and in 1666 the city was devastated by the Great Fire of London. And from 1652 until 1674 England and the Dutch Republic fought a series of wars stemming from a fierce commercial rivalry. Following England instituting the 1651 Navigation Act which was aimed at barring the Dutch from involvement in English sea trade, a series of sea battles were fought with both sides suffering heavy losses consequently resulting in a peace agreement signed at the Treaty of Westminster in April 1654. By 1665 however the same rivalry once again led to war with most battles being won by the Dutch, despite a heavy initial defeat. The disruption of the plague and Great Fire contributed to England’s difficulties which worsened in 1667 when, despite negotiations already  taking place, a Dutch fleet sailed up the Medway, landed soldiers at Sheerness, stormed forts at Upnor and Chatham and destroyed or captured a significant part of the English Fleet. The war was ended soon after by the Treaty of Breda. Osborne’s fort was built during this period of uneasy peace in 1671 as a defence against Dutch raiders. 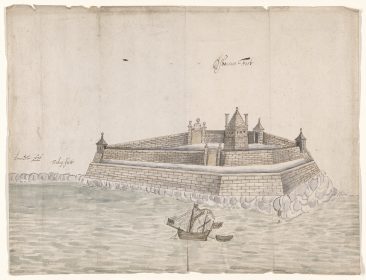 War broke out again in 1672 when England supplied ships in support of Louis XIV of France’s invasion of the Dutch Republic. A series of naval encounters took place before in 1674, while the land war continued, England and the Dutch made peace. The war itself which at its height involved France, Sweden, the Dutch Republic, Spain, Lorraine and the Holy Roman Emperor ended in 1678 when the huge financial cost  and the imminent prospect of England re-entering the war on the side of the Dutch persuaded Louis to make peace.

Its design and construction.

The Fort was designed and built in 1671 by Robert Trollope and Major Daniel Collingwood who was the then Captain of Holy Island. It is one of a few remaining fortifications of this period. Others built at the same time are at Plymouth, Hull, and Portsmouth. It was far larger than a cursory glance at the remaining ruins would indicate. Why it was called Osborne’s Fort is not known. 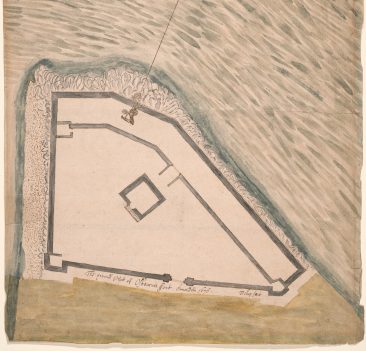 The square building that remains is the Redoubt which stood a little to the east of the centre of the fort and is 6.6 metres square and constructed with substantial stone walls up to 1 metre thick. The original fort was an irregular pentagonal shape roughly 64 metres x 32 metres. The longest part running approximately East North East x West South West and the shorter North to South. The Redoubt had a pitched roof as did three Angle turrets. There also appears to have been a fireplace in the south west corner. There was a gateway in the south perimeter wall about 1.8 metres wide giving access to the lower gun platform which was 5 metres wide and ran along the line of the wall. There was another gateway about 2 metres wide in the north west perimeter wall. These enclosure walls vary in thickness between 0.6 and 0.8 metres. Seventy years after its construction the threat from the Dutch had passed and the Fort was in decline. A drawing dating to 1742 shows the Redoubt in good condition and roofed but the perimeter walls are already decaying. 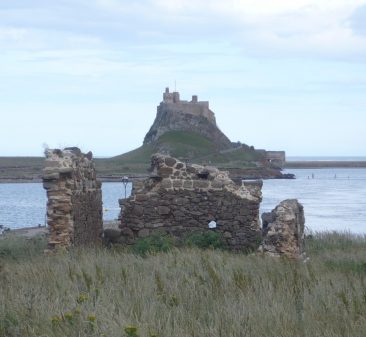 Where the land under the original southern wall had been eroded it exposed stratified layers of a midden. Before the eroded area was repaired it was investigated and animal bones, charcoal, flint waste and plant remains were sampled and analysed. The plant remains may be associated with early medieval Scandinavian occupation of the Island and the charcoal was from possible prehistoric layers suggesting that the Heugh has been occupied over the last 8000 years.