Inns and Pubs of Holy Island

In 1794, an observation was made of Holy Island that the village consisted of a few houses, two or more of which were Inns. By 1825 Eneas Mackenzie remarked that there were 100 houses and seven Inns, some of them being convenient and respectable. From a peak number of nine in the mid-1850s, the number had dropped back down to seven by 1871, with five listed in 1881 and four by 1904.

The property that housed The Swan Inn stood on part of the site on the corner of Marygate and the road into the village, and was probably operating as an Inn by the late 18th century. Owned by the Selby family and inherited by their Lilburn descendents, the whole corner site was sold in the late 1860’s and the building demolished to make way for Cambridge House and the Reading Room.

The Crown and Thistle.

There is a mention of the Crown and Thistle in 1813, and again in 1827, but I’ve not found one beyond this, and its whereabouts is unclear. It seems to have had some connection to the Lewins family, and was just possibly an earlier name for the Iron Rails.

The Plough Inn on Prior Lane included a brewhouse in 1789 and was sold to Tweedmouth brewers Sibbit, Dickson & Co. in 1835. However, although it was still called the Plough in 1851, it doesn’t appear to have been operating as an Inn, and was not listed in any directories of the 1850s. The Brewery sold it in 1860.

The Red Lion and Selby Arms.

A property on the west side of the Market Place was leased to Berwick brewers Chartres, Elliott & Co. in 1824 for use as a licensed alehouse. It became the Red Lion, but was renamed the Selby Arms in 1839. In 1842, the landlord John Moffat met his unfortunate end in the hayloft above the adjoining stables. By the late 1860s it was advertised as an old established hotel, but in 1871 the licence application was refused on the grounds that there were quite enough public houses on the Island already.

The Britannia Inn and Sun Inn.

The Britannia Inn, also on the Market Place was known as the Sun Inn until 1816 when, as the Britannia Inn, owner Henry Collingwood Selby sold it to Sibbitt, Dickson & Co.. One of the licencees was married to the sister of Robert Crossman, a local brewer and later Lord of the Manor of Holy Island. In 1871, Eleanor Moore’s licence renewal application was refused on the grounds of her previous drunken behaviour and ‘want of good character’, and the Inn closed. Although a licence application was made in 1873, it too fell victim to the attempt to restrict the number of pubs on the Island.

The Fisherman’s Arms, first listed in 1851, was also located in a cottage, facing the west end of Marygate. It was owned and run by James Wilson and then his son-in-law William Rankin who was also a farmer. Another farmer, Richard ‘Ritchie’ Gardiner, took it over by c.1866. He held ‘beer shifting’ competitions for a particular fishing crew, but in 1889 his licence renewal application was refused on the grounds of a conviction the previous year for drunkenness.

The Ship Inn was listed in a directory of 1827, and located in a cottage on the north side of St. Cuthbert’s Square. It seems to have been largely run and frequented by fishermen until 1903, when the premises were subject to an inspection. Finding the place in a dirty condition, the pub was ordered to close.

The Iron Rails and Northumberland Arms.

The Iron Rails and Northumberland Arms were both at the east end of Marygate, with a small cottage between them. The former was owned by Sibbit, Dickson and Co. by 1841, when it was run by James Brigham, who also ran his carriers business from there until 1851. The Northumberland Arms, first listed in the 1851 census, was then owned by Ralph Grey. His son James was a managing partner at the Border Brewery in Berwick in the late 1860s, which by then were also running the Tweedmouth brewery. William Wilson occupied the Northumberland Arms in 1841 until his death in 1857 when it was taken over by his nephew Ralph Wilson. 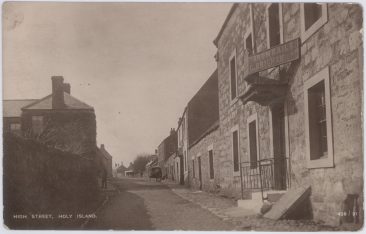 The Wilsons were connected by marriage to the Greys and to Robert Crossman. William’s cousin’s son, another Ralph Wilson, took over the Iron Rails in 1858. So there were family links between both pubs and with local breweries. The Northumberland Arms licence passed down through the Wilson family, also pilots, harbour masters and lifeboat superintendents, until 1830. The Iron Rails licence transferred to George Brigham in about 1880, and it was kept by him, then his daughters until 1939. The Kyle family took over the ownership and licence of the Northumberland Arms in 1930, and were connected by marriage to the Lukes (descendants of the Brighams) who ran the Iron Rails from 1939. The two families between them ran the Northumberland Arms until the 1970s. 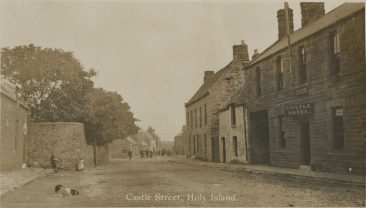 The Castle Inn first appeared in a directory of 1855 and was in one half of an old building on the site of the Lindisfarne Heritage Centre on Marygate. In 1876 the licence was taken by Robert Brigham son of the James Brigham who had kept the Iron Rails in the 1840s. Robert Brigham’s brother John took over the Castle Inn in 1888.

The Anchor and Crown and Anchor.

The Anchor, to the south east of the Market Place was listed in 1827 with victualler George Rankin. When his widow Jane took over on his death in 1852, it was known as the Crown and Anchor. Roddam Lilburn Yetts, Jane’s son from her first marriage, ran it from 1857 followed by his nephew Robert Lilburn Yetts. Robert Brigham moved there from the Castle Inn in 1888, and on his death in 1897 his son James took it over. James’s sister Sarah was married to Thomas Kyle, who had bought the Northumberland Arms in 1830. In 1892, the owner of the Castle Inn applied to demolish and rebuild it, and it had reopened as the Castle Hotel by 1901 with Thomas Kyle as proprietor. 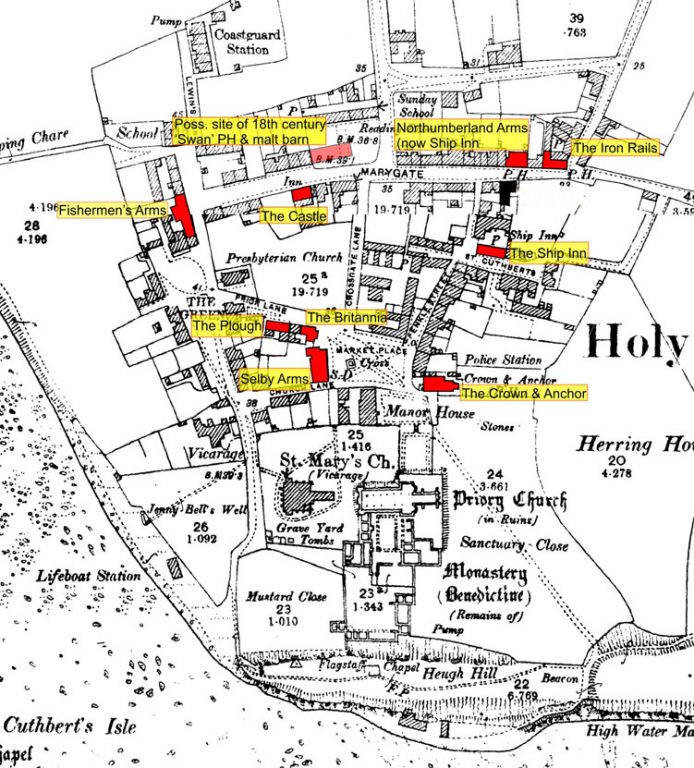 To find out more see article:  ‘Evidence of good character’  Inns and Public Houses on Holy Island from the early 19th century to the mid 20th century by Julia C. Day.

Inns and Pubs on Holy Island.