Since its foundation in the late 19th century until the 1960s, the Royal Northumberland Yacht Club has had close associations with Holy Island and while these have reduced in recent times there is still an annual race from their base in Blyth to the Island.

The Northumberland Sailing Club was founded in 1890 by a group of enthusiasts who kept their yachts at Alnmouth. Its first President (from 1896) was the 6th Duke of Northumberland, a position held ever since by his successors. The first recorded function of the Club was on 30th August 1890 when it promoted a regatta at Alnmouth.

From 1894 the Club promoted several Regattas at Cullercoats at which, as well as the various cruising yachts, there was also racing for the local fishing boats – sailing cobles – which were exempted from all the usual racing rules by being allowed to shift ballast at will, and to use the back stroke of an oar on the aftermost thole pin to throw the boat out of irons. Irons being where the boat is stuck head to wind unable to bear away and fill the sails.

The Club moved to Blyth during the 1890s acquiring a schooner, re-named Tyne, which was moored in the South Harbour in 1899 for use as a House Yacht or Clubhouse. Suffering from extensive rot the Tyne was replaced in 1924 by a re-inforced concrete Admiralty Tug re-named as House Yacht Tyne II. Sailing from a major coal exporting port meant that the Blyth yachts of that era had a distinctive dark shade to their sails! During the Second World War the House Yacht was requisitioned by the Admiralty and when handed back in 1945 was in a sorry state. In 1949 it capsized at its moorings leaving The Club without a base and with the serious problem of removing the wreck. In 1952 it purchased a Lightship LV50 previously based at the mouth of the River Orwell in Suffolk. Refurbished and renamed House Yacht III it was put into commission in 1954 and, when the wreck of the previous yacht was finally cleared, towed to its present berth in 1957.

A limited number of Yacht Clubs are authorised to use the Blue Ensign of His Majesty’s Fleet defaced with the badge of the Club. (The Percy Lion with the stiff tail). The Runciman family which had been involved with the Club from its foundation were instrumental in achieving this and the Club’s Royal Warrant followed in 1935, after which it became the Royal Northumberland Yacht Club. In 1955 the Club was honoured to receive the Patronage of H.R.H. The Prince Philip, Duke of Edinburgh, and in 1963 provided crew for his Royal Highnesses yacht, Bloodhound, for part of her round Britain cruise. 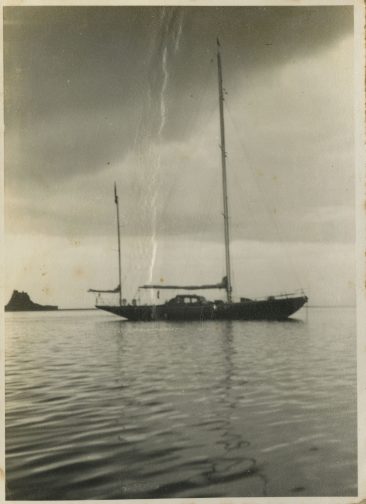 The period between the wars for amateur yachtsman was a million miles away from the hi-tech sailing word of today. Risks were taken and accepted as the norm which would fill today’s authorities with horror. The smaller yachts in the pre-war era were almost invariably engineless, and safety equipment virtually non-existent. There were no guardrails, pulpits, pushpits or safety harnesses, beyond possibly a line around the waist. Personal buoyancy was cork or kapok and too bulky for normal use. A Major Burton was thought to be slightly eccentric for routinely towing a red line astern in case he fell in! It was quite usual to sail small open boats with ballast and no buoyancy, and from time to time these were tragically lost. In 1932 one such boat, the Cutty Sark, was sunk while racing. One man was lost but two other crew saved by another competitor in a 16’ boat. In 1933 the Phoenix went down on passage from Blyth to Amble with the loss of both of her crew and in 1938, Iris sank on passage from Blyth to the Island, again with the loss of both her crew. 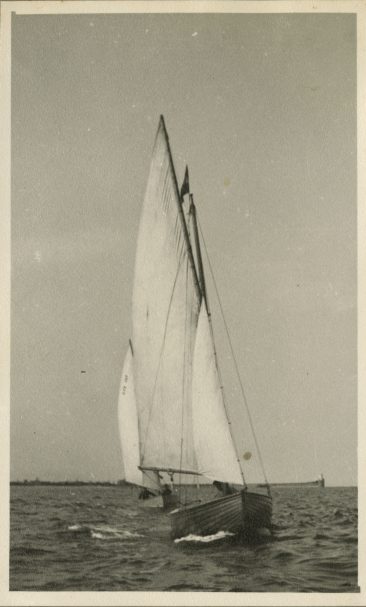 Two of the boats which regularly raced in that period are now based at the Island, Kapala and Wren. 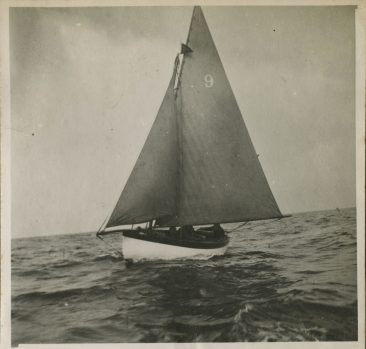 The Club and the Island.

The longest race in the Club calendar is the annual RNYC Bass Rock Race, 155 miles from Blyth, leaving the Bass Rock in the Firth of Forth to port and returning to Blyth. It developed from the Holy Island meets of the early 1900s, when the course was from Blyth to a mark off St. Abbs Head ending at the Island. Subsequently yachts raced to Holy Island and from there around the Bass Rock and back to the Island, a course of some 85 miles

The Club took its relationship with the Island community and its social life seriously! As did their hosts as the following excerpts from newspapers of the day illustrate.

Berwickshire News. July 8th 1902. On Coronation Day the children of Holy island were entertained to tea in the National School, and every child present received a mug bearing a picture of the King and Queen ——-A bonfire and fireworks were lit on Monday night. Northumberland Yacht Club gave a free concert in the National School on Friday night.

Morpeth Herald. July 4th 1903. The yachtmen under Mr Runciman gave a concert in the National School, Holy Island, which was crowded. Mr J. Thompson of Consett presided at the piano, and Mr Runciman took the chair.

Berwickshire News. June 30th 1908. At a special sitting of Norham and Islandshire Police Court at Berwick ———-an application was made by Geo. Brigham, license holder of the Iron Rails Inn, Holy Island, for an extension of his license for 5 nights, June 22nd to June 26th, from 10 pm to 12pm each night on the occasion of Northumberland Yacht Club’s annual meeting on the Island. The application was granted.

One pub did not seem to be enough and in 1909, 1910, 1911, 1912 and 1914 applications were applied for and granted to Mr Brigham for the Iron Rails and Geo.Wilson for the Northumberland Arms. These subsequent applications were subject to only members of the Club being admitted. 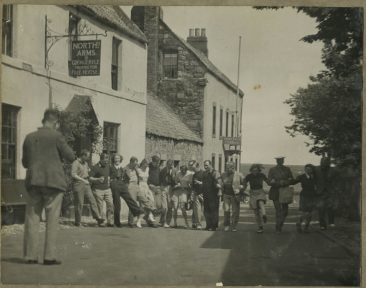 In 2019 the Royal Northumberland Yacht Club gave the Holy Island Community Archive Group access to their photograph albums and, with the Clubs permission for which the Archive Group is grateful, some of their photographs are reproduced here illustrating some of the boats and people who raced to and enjoyed the hospitality of the Island in the late 19th and early to mid-20th centuries. 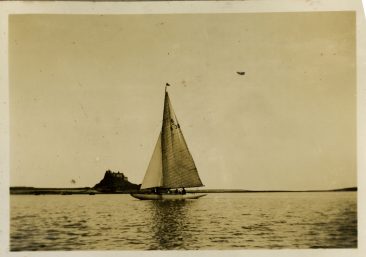 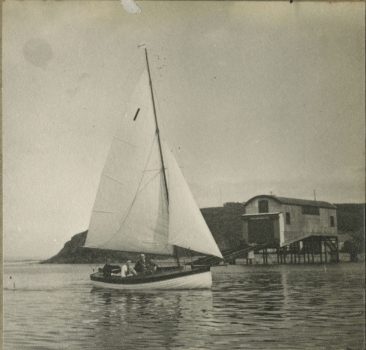