The Conservation of Lindisfarne Castle

Lindisfarne Castle has recently been through a major period of vital conservation work designed to safeguard the future of this iconic landmark.

The exposed location of Lindisfarne Castle causes the fabric of the building to be under constant pressure from the elements. This contributed to several problems within the building such as penetrating damp, deterioration of stonework and pointing, and failures of windows. These issues have always been a problem here, but by 2013/14 they had got to a stage where action needed to be taken. The castle required significant investment to improve the building fabric and help the structure deal with what the weather throws at it.

The idea behind the work was firstly to try out a number of methods designed to combat the problem. Certain materials used in the past during maintenance work are hindering the movement of moisture through the structure, and so causing problems in particular areas.

The start of the work and the Castle closure

We started work in late 2015 trialling specified methods aimed at mitigating these issues in a number of these key areas around the building. This work then carried on up to the start of the main project in November 2016. These works were on display to our visitors throughout the year and some works were carried out during opening hours. Works included pointing replacement, packing and pinning of masonry, dressed stone replacement, render trials, window refurbishment, internal cement render removal and drainage investigations. The trial works in these specific areas of the Castle were critical in our planning of the full programme of works.

In order to carry out these works the Castle building was closed to the public from November 2016 to April 2018.  We had hoped to have the castle open to visitors during project works throughout, but as we started undertaking the trials it became clear that the amount of interruption and intervention by contractors would not be compatible with visitors in such a small confined space. We considered a number of partial opening models but each we felt would only prolong the work beyond what is reasonable. We therefore took the decision that closing the Castle was the quickest and most effective way to get the work done.

In terms of the main project itself, the works saw the Castle emptied of its collection – the first time this has happened in over 100 years – and then handed over to the main contractor. They then set about installing protection inside the building; mainly in the form of plywood or hardboard. This gave the Castle a strange ‘yellow’ appearance inside, and with the installation of festoon lighting throughout, the building more resembled an old mine than an Edwardian holiday home! 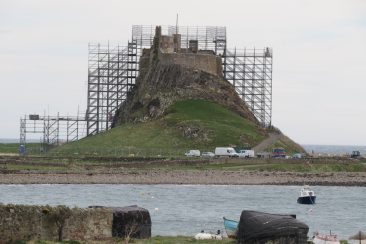 Scaffolding was erected at the Castle in order to reach all areas where work was to be carried out. This required the most spectacular scaffold Holy Island had ever seen and could be marvelled at for miles around. The process of removing cementitious material from the walls began internally during winter 2016 and work commenced outdoors in Spring 2017. 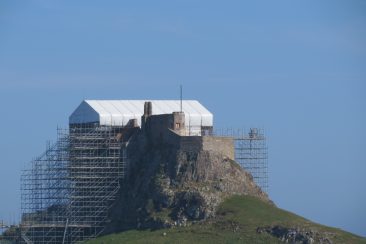 Scaffolding and Tent in place

On the roof the drainage system would be modified to take water away from the building without effecting any of the walls, while all 108 windows would be refurbished and reinstalled. A few extra jobs popped up we weren’t expecting, such as the careful replacement of all three tracery windows on the north elevation, and the painstaking uncovering of 17th century wall paintings in the Kitchen.

The work was critical to the long-term sustainability of the Castle as a historic building and visitor attraction. Not to act would have compromised that sustainability and lead to a level of deterioration that we feel would be unacceptable. Much of the work and investment was in our specialists seeking to find some long-term solutions to remedy or manage some long-term problems – not least water ingress. We think this investment, including the works themselves, has improved the condition and environs of the castle and greatly informed our investment in the castle for years to come.