Is it a getting old thing or just yearning to be out and about at all hours enjoying the challenge? Or is it just remembering yesterday?

The huge inter-tidal area between the Island and mainland provides a valuable natural commercially viable nursery for fish and shellfish, as well as a spectacular often changing seascape. It also harbours a precious food source for wildfowl and waders on migration and for those that over-winter in the area far from the inhospitable far north and east.

This segment of the North Northumberland coast could be likened to a motorway service area where you stop off, refuel and move on. Here the intertidal area is jam packed with a selection of invertebrate life that waders and some duck enjoy. The marine grass zostera is the preferred feed for Wigeon and the non-quarry species Pale Bellied Brent Goose.

It’s that predictability of a regular food source and a relatively quiet area that attracts the wildfowl, waders and the Hunter to the slakes.  The shooter, more commonly known as a Wildfowler pits his skill against the weather, the terrain and sharp eyed quarry like fast flying Wigeon. The Fowler usually operates at dawn, dusk, under the moon and when the weather is rough and the birds fly low and fast along the tides edge.

The October Moon that follows the Harvest Moon is often called a ‘Hunters Moon’. Why? Because the bright Hunters Moon often helps the Wildfowler’s night vision giving him the chance of a shot or two at night. Most birds and ground game will have summered well and built up fat reserves to help see them through the winter or migration. Those that have crossed the North Sea can quickly restore their energy levels by feeding day and night as the tide permits prior to moving on. Birds in good condition are a valuable asset for the table and deep freeze and yes not so long ago those living in coastal communities relied on wildfowl to put food on the table and a bit of cash in the pocket of those whose boats were too small to put out in winter seas. So the Harvest Moon was a valuable first night time opportunity for the fisherman/wildfowler to bag a duck or two.

At night the local shooter would walk out from the Snook through the Pilgrims Way to the Outer Swad where some had boxes or old bath tubs sunk into the mud. They would delve into the box for a baler, empty out the water in the box or bath and drop in a bag or bottle of straw to provide for a dryish seat. Stack their gear safely and having looked at the conditions and sight, then set their decoys or, if a Fowler had no decoys, he would pull together a half a score of mud models to resemble feeding birds and the settle back in his box until the ducks flew. Those Fowlers without a box would lie in the bottom of a drain or gully and hope to attract a Wigeon over their decoys by whistling the birds in. When he’d had a shot, perhaps two or three, or the tide had started to flood it was time to head back to the shore. 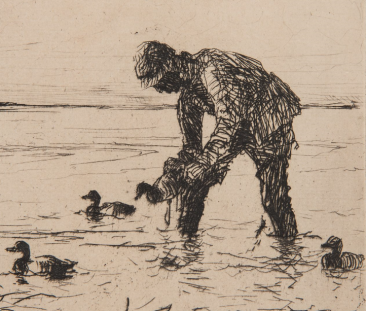 On a good night (for the Fowler) 6 or 7 Wigeon might be bagged. After a night on the Slakes the shooter usually ended up in the Iron Rails and it was always said that far more ducks were shot in the Rails than were ever shot on the Slakes!!!

As well as ‘wildfowling’ on the Island other favoured berths across the area were the South Corner at Elwick, Teal Hole & the Realy Law at Fenham Le Moor, The Mill Burn End at Fenham and the Dolphin Stones & North Point at Beal. On a good night for Fowling, it was not unusual to note 60 or more shooters spread across the hunting area. All of whom were monitored, had to show their Permit to Shoot and their bag. No wrong doers were tolerated! Although in the early days of controlled shooting it was a bit like Dodge City in the Wild-West, after a season or two firm control was established and law-abiding prevailed. Those who broke the law often ended up in the Court.

Remember a successful Wildfowler had good field craft and a knowledge and understanding of the shore, but there were those less aware of the hazards involved and came to grief when moving over quicksand, across soft mud and through deep drains with an incoming tide. Occasionally placing themselves at risk and needing help to get back to the shore. Those who got themselves into difficulty were usually from the towns and cities and having been helped back to the shore decided the wildfowling was not for them!