A Peripatic Parsons visit to Lindisfarne

Visit to Lindisfarne – extract from an article by a ‘Peripatetic Parson’ which appeared in the Church Times of September 17th 1909.

……..Ere we had time to wonder how the boat could be gained on this flat sandy shore without not a little undressing, horse, trap, and all went calmly into the water, and out of the conveyance we stepped directly into the small boat manned by two bare-legged fishermen. The row across the mile of gently rippling intervening water was delightful, and by about half past nine we were stumbling over the rocky causeway that led us to the few lighted houses of the village of St. Mary’s.

It was difficult to realize that this was once sacred soil in the annals of England’s Christianity as we blundered on; but shelter had to be gained, and ere long we reached the two or three steps, guarded by small, rather curious sets of low iron railings which gives the unique name of The Iron Rails to this modest, but comfortable little hostelry. Here our hostess provided some supper, but the beds were all occupied. However, the difficulty was solved by the sister of our hostess coming to the rescue, for she was able to find us sleeping quarters at her own modest hostelry, the equally comfortable and spotlessly clean ”Crown and Anchor”.

In the afternoon the picturesquely situated castle, perched on a steep conical rock of basalt at the extreme south east of the island, was visited. It was built quite early in the sixteenth century for protection against the Scotch or the French, and has no feudal significance. It is sometimes stated that it was built by Prior Castell, which probably means that it was erected by the Crown with his assent and sanction. It was garrisoned by Parliament in 1646, and in 1715 was held for two days by one Lancelot Errington on behalf of the Pretender. Until recently the castle was used as a station for a detachment of the Coast Brigade of the Royal Artillery, and guns were mounted on the platform. But since the advent of the far-carrying great guns, this pile of most substantial masonry has become obsolete as a place of defence, and the Government let it on a long lease to Mr. Edward Hudson (of Country Life fame) with the power of resuming it at any date if required for national use. Mr. Hudson has bestowed much care and excellent taste in adapting this small fortress for residential purposes. and has made it a perfect treasure-house, from top to bottom, of genuine old world furniture of every kind. The path up some sixty feet to the castle entrance is a paved causeway, there a small portcullis gives access to a stairway hewn in the solid rock. The views from the platform on the summit, and occasionally, as we mount, through the embrasures in the massive masonry, are singularly extensive and impressive.

They extend over the dreary looking island towards Emmanuel Head on the north-east, and towards the Snook on the south- east; the coast-line northwards is visible beyond Berwick to St. Abb’s Head, whilst the imposing outline of Bamburgh Castle stands out to the south; inland to the west are the near Kyloe hills, with the Cheviot range beyond them; and again, seaward towards the south-east is the low-lying archipelago of the Farne islands, sacred to the memory of St. Cuthbert. A profusion of wild flowers deck the skirts of this castle rock. The horned yellow poppy was in full flower, and so, too, was a large clump of the noisome henbane.

Ere leaving the island, on the shore to the south-west, facing the little island where the foundations of the chapel of St. Cuthbert-in-the-Sea have been exposed, we stopped to search with some success, for the tiny circular fossils known as St. Cuthbert’s Beads. The wearing of these is still supposed by some to be a preservative against shipwreck or drowning at sea.

Before the evening closed, the usual route between Holy Island and the mainland was taken, for it was low water, and the three miles of sand stretching from Chare Ends on the island to Beal on the mainland was entirely clear of sea. The route is plainly marked out by a long procession of lofty stakes or poles, and for part of the course by some of the ancient heaps of yet unsunken stones that guided the pilgrims in the days before stakes were used. In two places on the mainland side where there is the most risk of a sudden influx of returning waters, refuge boxes are fixed to stout poles, gained by rough ladders, for the safety of rash adventurers who may attempt the passage at risky times. 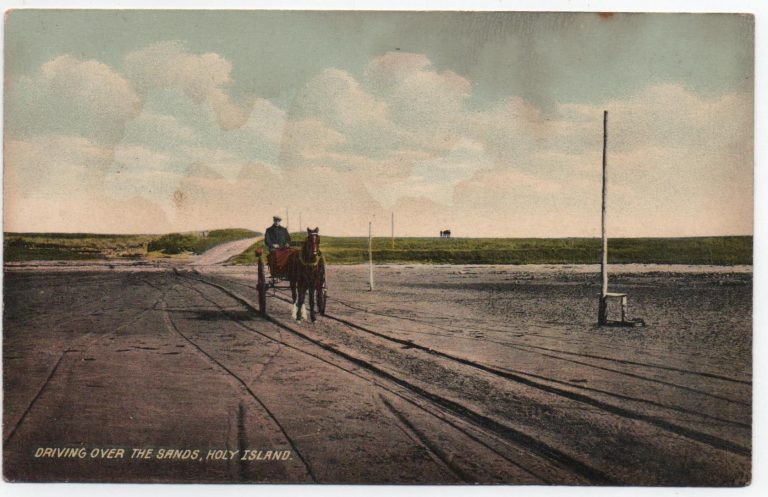 We were content to cross this sandy waste in a two-wheeled conveyance, but when leaving Lindisfarne, we had spoken to two ladies who had just arrived on foot; for the greater part of the track the sand had been practically dry, but now and again, for some yards, there was a sufficiency of lingering water, or water-charged sand, to wet the feet about ankle high. Daily the passage is made barefoot, though usually by the men of the district in seamen’s boots.

On gaining the shore at Beal, a kind of well of water, with an adjacent seat, was pointed out as the place where the barefooted ones usually resumed their shoes and stockings. The train and a certain amount of walking brought us again to the “Blue Bell” of Belford.

Editors note. The Snook then as now is in the North West of the Island, not the South East!