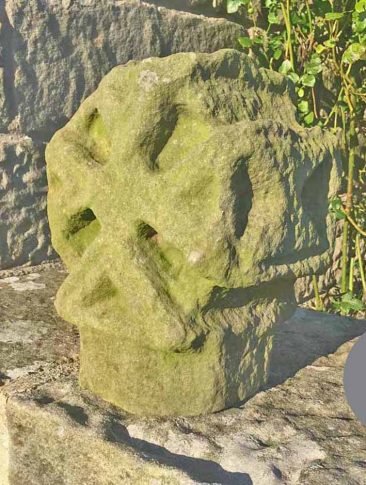 The head of an early cross was found some years ago, reportedly in the late 19th century farm buildings at Spindlestone and, having been kept outside on a wall for many years, is now under shelter in the safe possession of the landowner. The cross head is of sandstone, and measures 340 mm high by 245 mm wide and 210 mm thick.  Both faces may have originally been similar; depicting an expanded-arm cross with sunk rectangular panels between the arms, with at the head centre an incised ring (only preserved on one side), and on each arm a sunk triangular panel within an incised border. The arms appear to have projected slightly beyond the sunk spandrels. The ends of the lateral arms both have a rectangular panel with a pair of sunk triangles within an incised border. At the base is a short section of integral octagonal shaft, which seems to have been deliberately cut through. The section showing a rough diagonal pecking. The stone is cracked at the base; the crack extending almost to the top, so it is in a rather parlous condition and requires gentle handling.

This is clearly an early medieval piece, which could date from before or after the Norman Conquest, but the octagonal shaft and neat chip-carved sunk panels would probably go best with a date in the later 12th century. 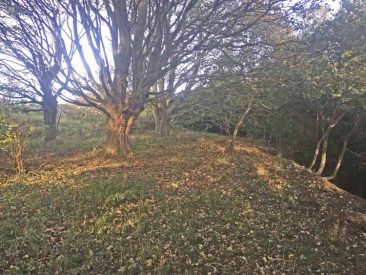 The origins of this cross-head are unknown, but it is presumably from a local source, perhaps removed from a churchyard or boundary where it served as a marker. Nearby Bamburgh is a potential source, but perhaps more likely is the site of St Elius Chapel (HER 5241) the remains of which, on Spindlestone Heugh, are of probable medieval origin, although its earliest historical record, according to the Northumberland Historic Environment Record (HER), was in 1590 when it was recorded as ‘the chapel called St Elius chapel, situate in Spindlestone Heughe’. Its existence as early as 1293, however, is indicated by the record of a claim by the Hospital or Priory of St John of Jerusalem, Clerkenwell, which presumably held it, for breaches of Assizes of Ale, etc. in Spindlestone.

The only known record of its physical remains is in a report of a visit to its probable site carried out in 1924, reported in History of the Berwickshire Naturalists Club (1923-25, 194):

On reaching the Spindle Stone, an isolated column of basalt some 22 feet high and 5 by 2 across, the Secretary narrated the legend of the Laidley Work. The party then examined the supposed foundations of “the chapel called St Elius chapel, situate on Spindlestone Heughe” which lie about 50 yards north of the Spindle Stone. The building, which measures 27 by 12 ½ feet internally, was excavated about a dozen years ago by Mr Burdon Sanderson. Mr James Nairn, who carried out the work, accompanied the party and pointed out where four graves were found north-east of the foundations; two coins were also found. On reaching the fort, which commands a fine view over Budle Bay and in other directions, members rested for a short time and partook of a light lunch.

A visit by the authors in September, 2017 confirmed that the current status and appearance of the site is as reported by the Berwickshire Naturalists in 1924 and in later 20th century inspections by Northumberland County Archaeologists. It survives as low earthworks on a small plateau above an old quarry face within the extensive, partly wooded grounds of Spindlestone caravan park. The wall lines can be traced within rough grassland, but the west end has been disturbed by the growth of a mature tree and part of the interior appears to be filled with rubble or spoil, thereby frustrating accurate measurement. It is not known how much of the site has been excavated or whether sufficient of the walls have ever been exposed to ascertain its precise form and dimensions, although a plan of the site shown in association with Spindlestone fort (page 198 of the same, 1923-25 edition of the History of the Berwickshire Naturalists) shows a rectangular building with doorway curiously (and probably erroneously) placed towards the east end of the south side. The presence of graves on the site does seem to confirm its ecclesiastical origins, however, although the dedication to St Elius (Elois, Eloy or Elegius), a French abbot as well as goldsmith and metal worker of great renown of the first half of the 7th century, remains to be authenticated.

Should this dedication be correct, as seems likely, it may be of interest in determining the origins and assigning associations for this chapel, located some distance from other known ecclesiastical establishments and, indeed, settlements. Could there be significance in its proximity to Spindlestone Heughs defended settlement? (HER ID 5242; NGR NU 1525 3392) This, although recorded as a well-preserved earthwork site of presumed pre-Roman iron age origin, could perhaps have been reoccupied in the medieval period but has not been investigated by excavation. 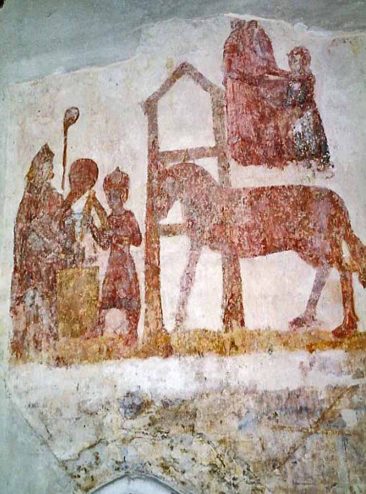 One of several legends associated with St Elius (or Eloi, as he is more commonly known in his homeland) – though not one that has any clear bearing on the situation of the Spindlestone chapel –  is that he resolved the problem of a horse reluctant to be shod, which he thought possessed by demons, by cutting off its foreleg and, while the horse stood on the remaining three legs and watched, re-shod the hoof of the amputated leg before miraculously re-attaching it to the horse. St. Eloi’s encounter with the possessed horse is shown on a 14th century wall painting at Slapton, Northamptonshire (below) where the horse itself stands (on three legs) before the entrance to Eloi’s smithy while Eloi himself, at the far left, holds the horse’s leg in his left hand and works with a hammer at a gold anvil. The same incident in the Life of St. Eloi is thought to be portrayed in a 15th century painting at Wensley, North Yorkshire and at Shorthampton in Oxfordshire.